The Church Lads' Brigade in the Great War 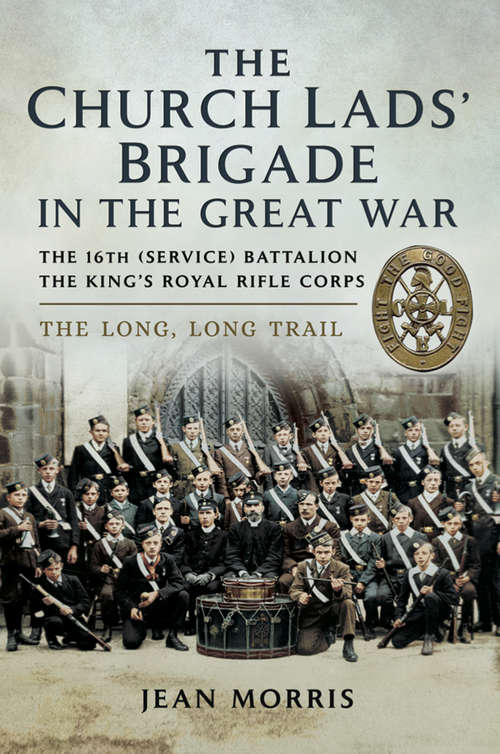 It is estimated that around 50,000 Brigade Lads served in the First World War, during which many honors and distinctions were awarded. The Brigade contributed two Service Battalions of the King's Royal Rifle Corps whose members were comprised entirely of past and present members of the Church Lads' Brigade. These were known as ‘Pals’ Battalions. The story of the battalion centers around the experiences of eight men who served and some who died in the Battles of The Somme, Arras and The Lys. In the latter half of the nineteenth century influential Christians were worried about the poor spiritual and physical development of young people. It was at that time that ‘Brigade’ groups began to spring up all over the UK. Walter Mallock Gee, who was Secretary of the Junior Branch of the Church of England Temperance Society and a ‘Volunteer’ Army Officer, founded the Church Lads’ Brigade in 1891. By 1908 the membership of the brigade stood at about 70,000 in 1,300 companies. When the ‘Call to Arms’ came from Field Marshal Horatio Herbert Kitchener in 1914, thousands of Britain’s youth flocked to join the armed forces. Members of the Church Lads’ Brigade joined up in their droves at recruiting stations all over Great Britain. Two Battalions were formed entirely from serving and ex-members of the Church Lad’s Brigade. The 16th (Service) Battalion and later the 19th (Service) Battalion, both sponsored by the Church Lads’ Brigade, became known as ‘The Churchmen’s Battalion’. In 1914 no one could have imagined the horrendous stories that would unfold from the bloody massacre at so many notorious battles across Belgium and the fields of Flanders. Ypres, Passchendale, Somme, Arras, Lys, and the brutal decimation of the battalion during the hell of the fighting at High Wood. No one could have imagined the discomfort and disease brought on by living in a trench full of water for days on end, or ‘over the top’ through acres of knee-high mud. More than 24 of the Church Lads’ Brigade were awarded a Victoria Cross for their bravery, but by 1918 many of those gallant young Lads would not return home. This is their story. The Author and the Publishers acknowledge that some material in this title has been taken from the website www.1914-1918.net without permission or acknowledgement and are grateful to the copyright holder, Chris Baker, for granting this permission retrospectively.