Adventures of a Bystander 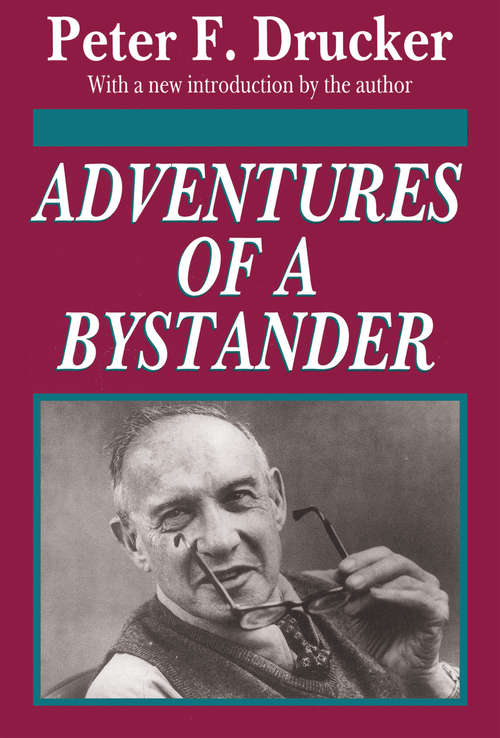 Peter Drucker's lively and thoughtful memoirs are now available in paperback with a new introduction by the author. He writes with wit and spirit about people he has encountered in a long and varied life, including Sigmund Freud, Henry Luce, Alfred Sloan, John L. Lewis, and Marshall McLuhan. After beginning with his childhood in Vienna during and after World War I, Drucker moves on to Europe in the 1920s and early 1930s, describing the imminent doom posed by Hitler and the Nazis. He then goes on to describe London during the 1930s, America during the New Deal era, the World War II years, and beyond.

According to John Brooks of The New York Times Book Review, "Peter Drucker is at a corner cafe, delightfully regaling anyone who will listen with tales of what must be one of the more varied—and for a practitioner of such a narrow skill as that of management counseling, astonishing—of contemporary professional lives." Dorothy Rabinowitz of the Washington Post writes, "The famous are here as well as the infamous.... All are the beneficiaries, for better or for worse, of Drucker's unerring eye for psychological detail, his remorseless curiosity, and his imaginative sympathy.... Drucker's book appears in a stroke to have restored the art of the memoir and of the essay."

Adventures of a Bystander reflects Drucker's vitality, infinite curiosity, and interest in people, ideas, and the forces behind them. His book is a personal and informal account of the rich life of an independent man of letters, a life that spans eight decades and two continents. It will be of interest to scholars and professionals in the business world, historians, sociologists, and admirers of Peter Drucker.