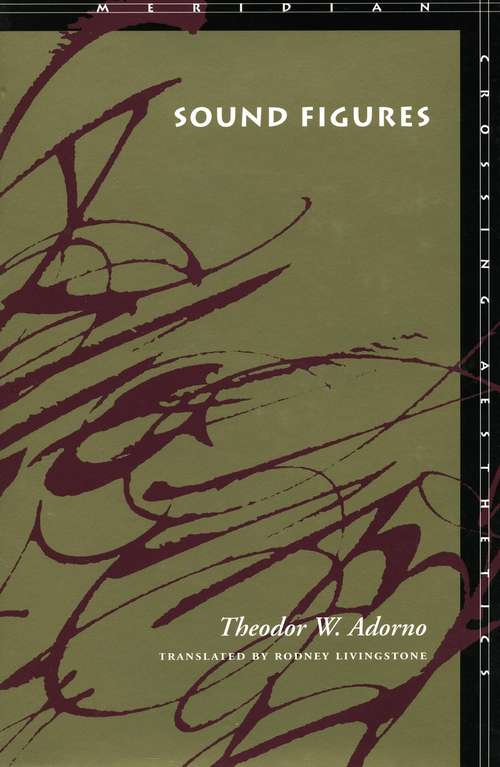 Theodor Adorno is one of this century's most influential thinkers in the areas of social theory, philosophy, aesthetics, and music. Throughout the essays in this book, all of which concern musical matters, he displays an astonishing range of cultural reference, demonstrating that music is invariably social, political, even ethical.

Adorno's insistence on the social character of aesthetic works will come as no surprise to those familiar with his writings, although many may be surprised by the volume's somewhat colloquial tone. This colloquialism, in dialogue with Adorno's unceasing rigor, stems from the occasional sources of many of the essays, mainly public lectures and radio addresses. As such, this volume represents an important and, for English-language readers, largely unfamiliar side to Adorno. His arguments move more quickly than in his more formal and extended musicological works, and the writing is much more accessible and generous than his usually dense and frequently opaque prose.

This volume includes essays on prominent figures in music (Alban Berg, Anton von Webern, Arturo Toscanini), compositional technique (the prehistory of the twelve-tone row, the function of counterpoint in new music), and the larger questions of musical sociology for which Adorno is most famous, including the relation of interpretation to audience, the ideological function of opera, and the historical meaning of musical technique. The essay on the sociology of music, for example, represents an early statement of what would soon become trademark principles of his mode of musical analysis, serving as a catalyst for his famous study Introduction to the Sociology of Music.

Some forty years after most of these essays were written, they remain fresh and relevant. In part, this is because Adorno's method has only recently begun to make substantial inroads into Anglo-American musicology. And the interdisciplinary nature of his thought provides a precursor for today's interdisciplinary studies.