Military Operations and the Notion of Control Under International Law 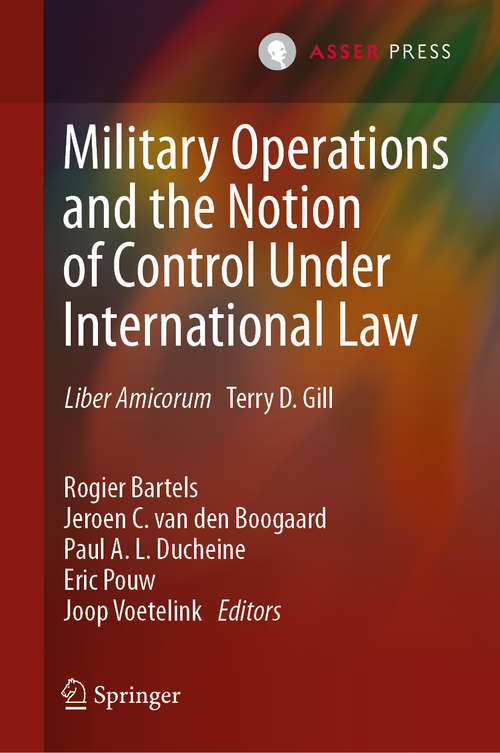 This book is a tribute to the work of Professor Terry Gill, offered to him by friends and colleagues who are also academics and/or practitioners in the field of International Law of Military Operations (ILMO).ILMO is a distinct sub-discipline within public international law and domestic public law, covering all domains of military operations: land, sea, air and (cyber)space. As such, ILMO includes elements of other branches of public international law, such as international humanitarian law, human rights law, the law on the use of force, the law of the sea, the law of State responsibility, arms control law and the law of international organisations. Importantly, as a hybrid field of law, ILMO covers the legal basis for military deployment both nationally and internationally, as well as the subsequent international legal regimes applicable to the forces (once deployed) and the domestic administrative and constitutional issues related to the relevant forces.Control is a central notion of ILMO and is the leading theme of this book. The contributions in this book reflect the variety of legal frameworks applicable to military operations and offer an insightful view into the various legal and factual roles of control. The legal notion of control is considered, inter alia, in relation to restraints in the decision to deploy military forces and the legal basis for doing so. The impact of control is also discussed in relation to State and command responsibility and in different situations, including during peace operations, occupation and other situations of armed conflict. Additionally, control is considered over the armed forces themselves, over detainees  migrants at sea and over the type or scale of force used in military operations, through targeting rules or rules of engagement. Furthermore, the book contains several discussions of control in the case law of international courts, within arms control law, weapons law and in the context of autonomous weapons systems.The editors of the book are all practitioners, academically affiliated to the Faculty of Military Sciences (War Studies) of the Netherlands Defence Academy and/or the Law Faculty of the University of Amsterdam.