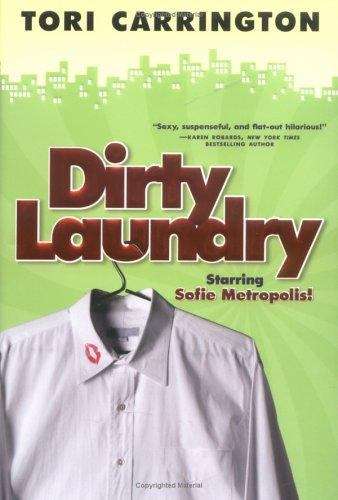 Sofie Metropolis is the newest PI on the mean streets of Astoria, Queens. She's known for her trademark frappes and her itchy trigger finger. She even shot one of her own clients!

Sofie's hot on the trail of a missing pet ferret--wait, aren't those illegal in New York City?--and a missing dry cleaner. According to his furious wife, Aglaia, Uncle Tolly was acting odd right before he disappeared. The proof? The brand-new Mercedes Tolly just bought. And the business's books, which show that Uncle Tolly was laundering more than just clothes.

Which is where the mob comes in, in the darkly handsome figure of Tony DiPiazza. Tony's very taken with Sofie. Too bad she won't back off the money-laundering and kidnapping (or is it murder?) investigation.

Really too bad, since hunky Australian bounty hunter/man of mystery Jake Porter is hanging around again, tinkering under the hood of Sofie's car and kissing Sofie like he really means it, only she's too busy to notice.

Too busy being attacked by a malevolent dry-cleaning bag, bailing Aglaia out of jail, airing out her apartment after an assault by noxious dog farts, and spying on her own father. Because Sofie's mother thinks that after nearly thirty years of marriage, her husband is having an affair. Can't anyone stay faithful for five minutes?

Sofie's quest for the truth gets her into hot water--and a pair of cement overshoes. It's not her best look.