Blood Is Not Enough 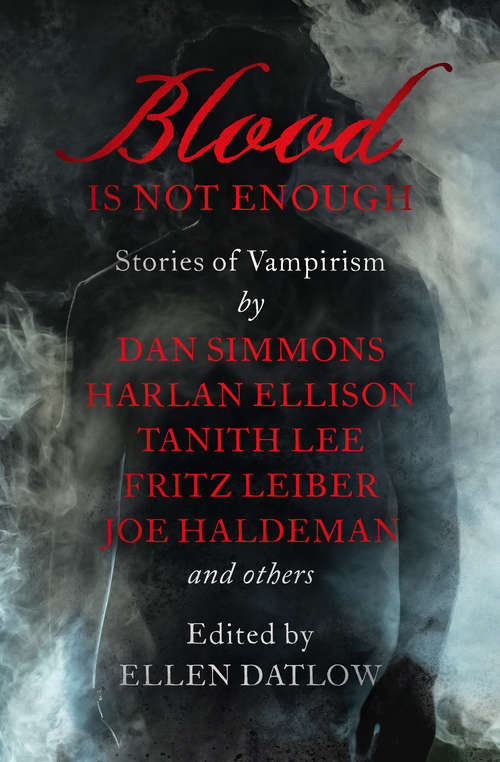 “An excellent collection” of vampire stories, from authors such as Harlan Ellison, Dan Simmons, Gahan Wilson, Tanith Lee, and Fritz Leiber (Publishers Weekly). Renowned editor Ellen Datlow has gathered seventeen variations on vampirism ranging from classically Gothic to postmodern satire, from horrific to erotic. These stories reflect the evolution of vampire literature from Bram Stoker to Anne Rice and beyond, resulting in a deeper exploration of their inner lives. Expanding the concept of vampirism to include the draining of a person’s will or life force, Datlow’s collection transcends the traditional “black capes and teeth marks on the neck” to reinvent an eternally fascinating subgenre of horror. In Harlan Ellison’s “Try a Dull Knife,” an empath stumbles bleeding into a nightclub, on the run from emotional vampires. A Broadway actress steals the emotions of her fellow performers in “. . . To Feel Another’s Woe” by Chet Williamson. And in “The Sea Was Wet as Wet Could Be,” Gahan Wilson offers his own surreal twist on Lewis Carroll’s “The Walrus and the Carpenter,” as two strangers on a beach lure intoxicated picnickers to a different kind of picnic . . . Blood Is Not Enough includes contributions by Dan Simmons, Gahan Wilson, Garry Kilworth, Harlan Ellison, Scott Baker, Leonid Andreyev, Harvey Jacobs, S. N. Dyer, Edward Bryant, Fritz Leiber, Tanith Lee, Susan Casper, Steve Rasnic Tem, Gardner Dozois and Jack Dann, Chet Williamson, Joe Haldeman, and Pat Cadigan.