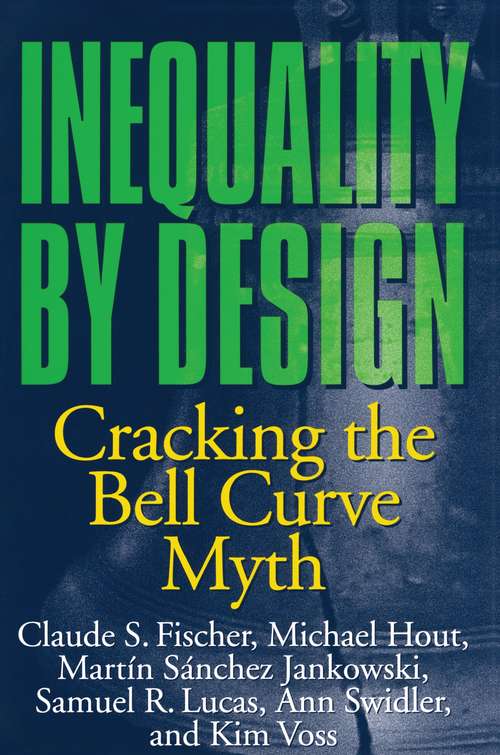 As debate rages over the widening and destructive gap between the rich and the rest of Americans, Claude Fischer and his colleagues present a comprehensive new treatment of inequality in America. They challenge arguments that expanding inequality is the natural, perhaps necessary, accompaniment of economic growth. They refute the claims of the incendiary bestseller The Bell Curve (1994) through a clear, rigorous re-analysis of the very data its authors, Richard Herrnstein and Charles Murray, used to contend that inherited differences in intelligence explain inequality. Inequality by Design offers a powerful alternative explanation, stressing that economic fortune depends more on social circumstances than on IQ, which is itself a product of society. More critical yet, patterns of inequality must be explained by looking beyond the attributes of individuals to the structure of society. Social policies set the "rules of the game" within which individual abilities and efforts matter. And recent policies have, on the whole, widened the gap between the rich and the rest of Americans since the 1970s. Not only does the wealth of individuals' parents shape their chances for a good life, so do national policies ranging from labor laws to investments in education to tax deductions. The authors explore the ways that America--the most economically unequal society in the industrialized world--unevenly distributes rewards through regulation of the market, taxes, and government spending. It attacks the myth that inequality fosters economic growth, that reducing economic inequality requires enormous welfare expenditures, and that there is little we can do to alter the extent of inequality. It also attacks the injurious myth of innate racial inequality, presenting powerful evidence that racial differences in achievement are the consequences, not the causes, of social inequality. By refusing to blame inequality on an unchangeable human nature and an inexorable market--an excuse that leads to resignation and passivity--Inequality by Design shows how we can advance policies that widen opportunity for all.