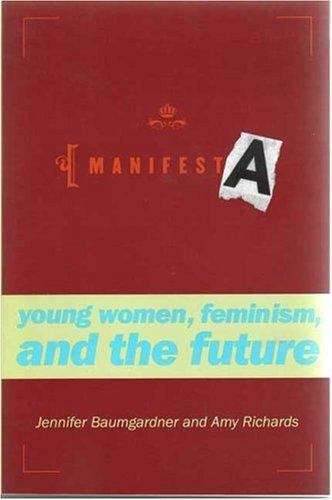 lives of young women. Offers suggestions on how individuals can get

involved in affecting positive change in their homes, their communities, on

campuses, and all over the world.

Richards and Baumgardner express a hope that feminists of all generations

can learn to listen to one another and work together. The book authors

insightful reflections on topics such as activism, the media, women's

history, the Equal Rights Amendment, mothers, reaching out to teens,

feminist books and magazines, diversity, and more. Conveys the message that,

while feminism is often perceived as something negative, girls in the "Third Wave" of the women's

movement are redefining it into something that a woman can be proud of.

This book was written when the authors were in their late twenties. Amy

Richards is a contributing editor at Ms. and heads the Third Wave, an

activist group for young women. Jennifer Baumgardner is a former editor at

Ms. and writes regularly for The Nation, Jane, Glamour, and Out.