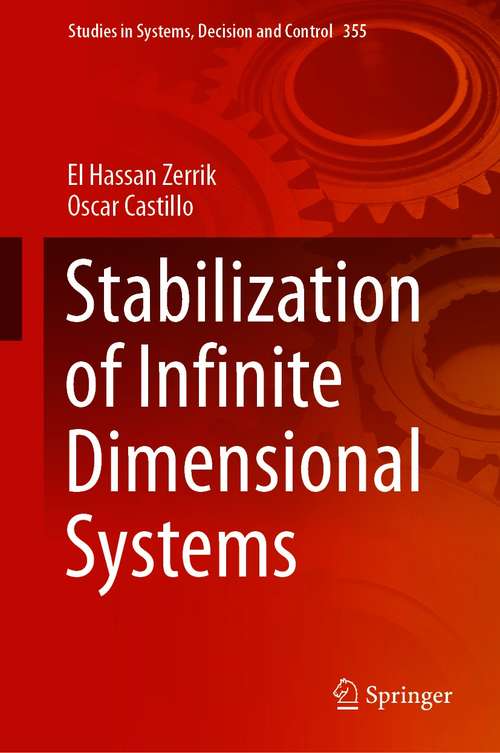 This book deals with the stabilization issue of infinite dimensional dynamical systems both at the theoretical and applications levels. Systems theory is a branch of applied mathematics, which is interdisciplinary and develops activities in fundamental research which are at the frontier of mathematics, automation and engineering sciences. It is everywhere, innumerable and daily, and moreover is there something which is not system: it is present in medicine, commerce, economy, psychology, biological sciences, finance, architecture (construction of towers, bridges, etc.), weather forecast, robotics, automobile, aeronautics, localization systems and so on. These are the few fields of application that are useful and even essential to our society. It is a question of studying the behavior of systems and acting on their evolution. Among the most important notions in system theory, which has attracted the most attention, is stability.

The existing literature on systems stability is quite important, but disparate, and the purpose of this book is to bring together in one document the essential results on the stability of infinite dimensional dynamical systems. In addition, as such systems evolve in time and space, explorations and research on their stability have been mainly focused on the whole domain in which the system evolved. The authors have strongly felt that, in this sense, important considerations are missing: those which consist in considering that the system of interest may be unstable on the whole domain, but stable in a certain region of the whole domain. This is the case in many applications ranging from engineering sciences to living science. For this reason, the authors have dedicated this book to extension of classical results on stability to the regional case.

This book considers a very important issue, which is that it should be accessible to mathematicians and to graduate engineering with a minimal background in functional analysis. Moreover, for the majority of the students, this would be their only acquaintance with infinite dimensional system. Accordingly, it is organized by following increasing difficulty order. The two first chapters deal with stability and stabilization of infinite dimensional linear systems described by partial differential equations. The following chapters concern original and innovative aspects of stability and stabilization of certain classes of systems motivated by real applications, that is to say bilinear and semi-linear systems. The stability of these systems has been considered from a global and regional point of view. A particular aspect concerning the stability of the gradient has also been considered for various classes of systems. This book is aimed at students of doctoral and master’s degrees, engineering students and researchers interested in the stability of infinite dimensional dynamical systems, in various aspects.