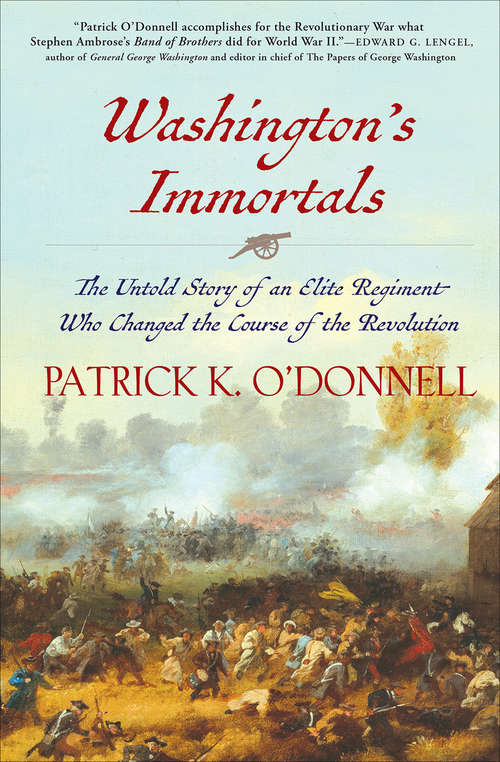 By the award-winning author of Dog Company: a historic account of a Revolutionary War unit’s “tactical acumen and human drama . . . combat writing at its best” (The Wall Street Journal). In August 1776, little over a month after the Continental Congress had formally declared independence from Britain, the revolution was on the verge of a disastrous end. General George Washington found his troops outmanned and outmaneuvered at the Battle of Brooklyn. But thanks to a series of desperate charges by a single heroic regiment, famously known as the “Immortal 400,” Washington was able to evacuate his men and the nascent Continental Army lived to fight another day. In Washington’s Immortals, award-winning military historian Patrick K. O’Donnell brings to life the forgotten story of these remarkable men. Comprised of rich merchants, tradesmen, and free blacks, they fought not just in Brooklyn, but in key battles including Trenton, Princeton, Camden, Cowpens, Guilford Courthouse, and Yorktown, where their heroism changed the course of the war. Drawing on extensive original sources, from letters to diaries to pension applications, O’Donnell pieces together the stories of these brave men—their friendships, loves, defeats, and triumphs. He explores their tactics, their struggles with hostile loyalists and shortages of clothing and food, their development into an elite unit, and their dogged opponents, including British General Lord Cornwallis. Through the prism of this one unit, O’Donnell tells the larger story of the Revolutionary War. “Well-written, and superbly researched . . . A must-read for Revolutionary War and Maryland history buffs alike.” —Bill Hughes, Baltimore Post-Examiner