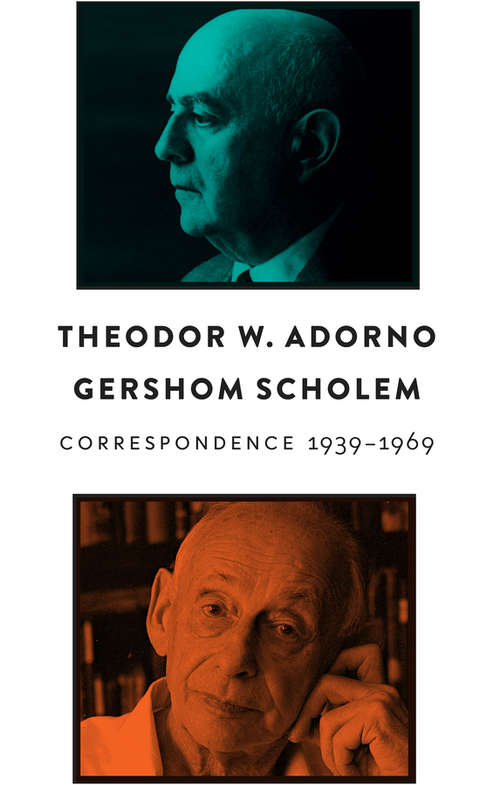 At first glance, Theodor W. Adorno’s critical social theory and Gershom Scholem’s scholarship of Jewish mysticism could not seem farther removed from one another. To begin with, they also harbored a mutual hostility. But their first conversations in 1938 New York were the impetus for a profound intellectual friendship that lasted thirty years and produced more than 220 letters. These letters discuss the broadest range of topics in philosophy, religion, history, politics, literature, and the arts – as well as the life and the work of Adorno and Scholem’s mutual friend Walter Benjamin. Unfolding with the dramatic tension of a historic novel, the correspondence tells the story of these two intellectuals who faced tragedy, destruction, and loss, but also participated in the efforts to reestablish a just and dignified society after World War II. Scholem immigrated to Palestine before the war and developed his pioneering scholarship of Jewish mysticism before and during the problematic establishment of a Jewish state. Adorno escaped Germany to England, and then to America, returning to Germany in 1949 to participate in the efforts to rebuild and democratize German society. Despite the differences in the lifepaths and worldviews of Adorno and Scholem, their letters are evidence of mutual concern for intellectual truth and hope for a more just society in the wake of historical disaster. The letters reveal for the first time the close philosophical proximity between Adorno’s critical theory and Scholem’s scholarship of mysticism and messianism. Their correspondence touches on questions of reason and myth, progress and regression, heresy and authority, and the social dimensions of redemption. Above all, their dialogue sheds light on the power of critical, materialistic analysis of history to bring about social change and prevent repetition of the disasters of the past.