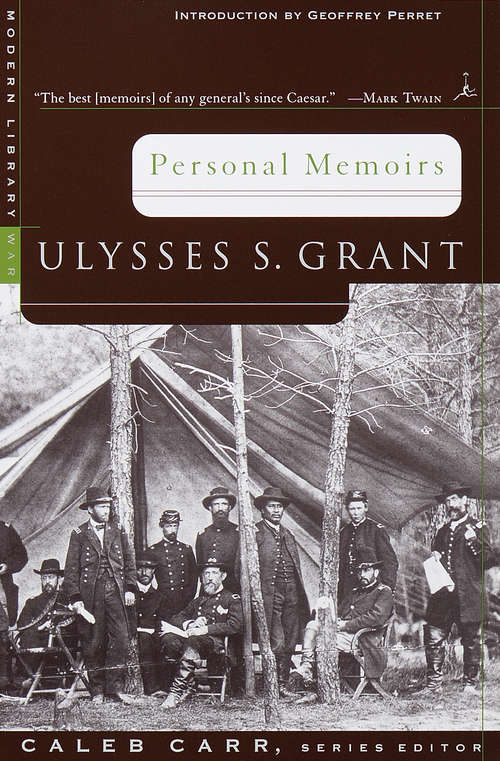 Mark Twain had known many of the great men of the Civil War and the Gilded Age, and esteemed none more highly than Ulysses S. Grant, who was modest, sensitive, generous, honest, and superlatively intelligent. Grant's courage, both moral and physical, was a matter of record. His genius as a general assured his immortality. In 1881, Twain urged Grant to write his memoirs. No one is interested in me, Grant replied. Out of the army, out of office, and out of favor--that was his life now. He reminded Twain that the Military History of Ulysses S. Grant, written by his wartime assistant, Adam Badeau, had sold poorly. And John Russell Young's book, Around the World with General Grant, published in 1879, had been a complete flop. Broke and sick--he began suffering agonizingly painful throat cancer in 1884-- Grant agreed to write four articles for the Century Magazine on some of his Civil War battles, and Century offered to publish his memoirs if only he'd write them. Twain was on a lecture tour when he heard that Grant might be willing to write a book and hurried back to New York to tell Grant that he could arrange for publication of the book by a small firm that he controlled. Grant accepted his offer because Twain had been the first person to suggest he write his memoirs. The inflexible will and powerful mind that helped make Grant a great general were stronger than the torturing pain, the sleepless nights, the terrors of death. Yet there was no sense of this heroic struggle in the narrative he produced with stubby pencils or by dictating to a secretary. The book was like the man himself--often humorous, frequently charming, always lucid, sometimes poignant, generous to his enemies, loyal to his friends. Twain was astonished when he discovered that Grant had produced a considerably longer book than he had contracted to write, but Grant had always tried to give more than was expected of him. He did so even now. Grant finished his book in July 1885. The Memoirs were a triumph. The narrative has the directness and limpidity of the purest English prose as it was first crafted by William Tyndell and then spread throughout the English-speaking world in the King James version of the Bible. Grant had reached deep into himself and into the world history of the Anglo-American people to grasp the core of its culture, the English language. He trusted in that narrative style that achieves its effects by never straining for effect, assembled it into vivid pictures sufficiently understated to allow an intelligent reader's imagination room to expand, and shaped a literary architecture with a born artist's eye. His recollections were inevitably partial and selective. As with all memoirs, Grant's was at its best as a revelation of the way he remembered the events of his tumultuous life and the feelings they evoked in him as death drew near. Its truth was less in the details of what he recalled as in the story he had to tell, of justice triumphant over a great evil. On July 23, 1885, several days after correcting the galley proofs of his book, Grant died in a summer cottage on the slopes of Mount McGregor, New York, surrounded by friends and family. The memoirs, published a few months later, have never been out of print.