The Affordable Care Act as a National Experiment 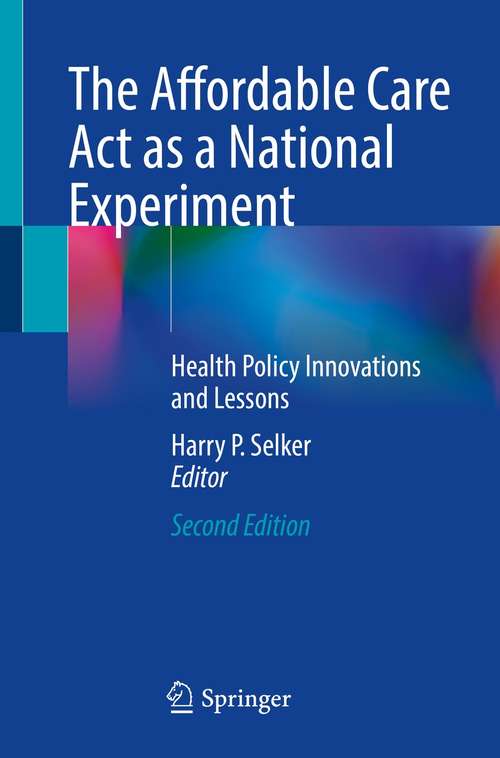 The landmark 2010 Patient Protection and Affordable Care Act (ACA), or “Obamacare,” is a topic of great debate in mainstream, academic, and scientific media that generated strong opinions across the political spectrum and our nation. Soon after the enactment of the ACA and the fierce debate that ensued, The Affordable Care Act as a National Experiment was published by Springer in 2014. Now five years later, just finishing an election year in which the ACA was a hotly debated issue, the second edition of this title examines the history, lessons, and impact of this ground-breaking legislation. Now a decade since implementation nationally, the ACA is the largest healthcare policy innovation in the United States in at least 50 years and one of our nation’s largest healthcare experiments ever. The history of public health and medicine shows us that to develop better solutions for important health problems, we must innovate.  And when we try a new strategy, we are reminded that to innovate is to experiment.  This is the basis of all medical research, public health interventions, and health policy innovations.  Moreover, in recent years, there is an increasing emphasis on “translational science,” research that always has an ultimate focus on having real impact on medical care and the public’s health – whether in translating from bench research to the bedside, or from limited clinical use into widespread practice, public health interventions or policy.As with the previous edition, the book opens with a chapter that gives a basic overview of The Affordable Care Act. The second chapter, which previously discussed the objectives of the ACA, now takes a look at the successes, unfinished work and impact of the ACA in the past ten years. The third chapter now ponders the question of whether the ACA has protected patients since its implementation while its previous counterpart gave predictions for the future. The chapters that follow highlight things such as Medicaid expansion and insurance reform under the ACA, the Supreme Court Review of the ACA, social determinants of health, stories of the uninsured and stabilization of the ACA, among others. The book rounds out with a summary of what’s next and the push for universal healthcare followed by an epilogue. Due to the timely nature of the subject matter, some chapters from the previous edition have been dropped and seven new chapters have been added in their place. The remaining seven chapters from the previous edition have also been fully revised and updated. Written by nationally known healthcare policy leaders who were involved directly in the creation and implementation of the ACA, the second edition of The Affordable Care Act as a National Experiment again will examine the history and impact of this ground-breaking legislation as well as recommend priorities, objectives, and next steps for translational research. It is an essential resource for all healthcare providers as well as policy makers and academics.