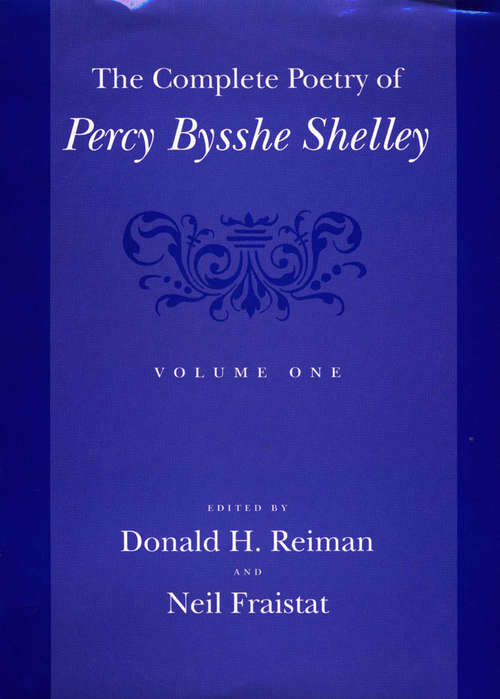 The first American edition of Shelley's complete poetry since 1892—with more poems, fragments, and collations than any previous collective edition.Winner of the Richard J. Finneran Award of the Society for Textual Scholarship, CHOICE Outstanding Academic Title of the Choice ACRLA milestone in literary scholarship, the publication of the Johns Hopkins edition of The Complete Poetry of Percy Bysshe Shelley makes available for the first time critically edited clear texts of all poems and translations that Shelley published or circulated among friends, as well as diplomatic texts of his significant incomplete poetic drafts and fragments. Edited upon historical principles by Donald H. Reiman and Neil Fraistat, the multi volume edition will offer more poems and fragments than any previous collective edition, arranged in the order of their first circulation. These texts are followed by the most extensive collations hitherto available and detailed commentaries that describe their contextual origins and subsequent reception. Rejected passages of released poems appear as supplements to those poems, while other poetic drafts that Shelley rejected or left incomplete at his death will be grouped according to either their publication histories or the notebooks in which they survive.Volume One includes Shelley's first four works containing poetry (all prepared for publication before his expulsion from Oxford), as well as "The Devil's Walk" (circulated in August 1812), and a series of short poems that he sent to friends between 1809 and 1814, including a bawdy satire on his parents and "Oh wretched mortal," a poem never before published. An appendix discusses poems lost or erroneously attributed to the young Shelley."These early poems are important not only biographically but also aesthetically, for they provide detailed evidence of how Shelley went about learning his craft as a poet, and the differences between their tone and that of his mature short poetry index a radical change in his self-image... The poems in Volume I, then, demonstrate Shelley's capacity to write verse in a range of stylistic registers. This early verse, even in its most abandoned forays into Sensibility, the Gothic, political satire, and vulgarity—perhaps especially in these most apparently idiosyncratic gestures—provides telling access to its own cultural moment, as well as to Shelley's art and thought in general."—from the Editorial Overview