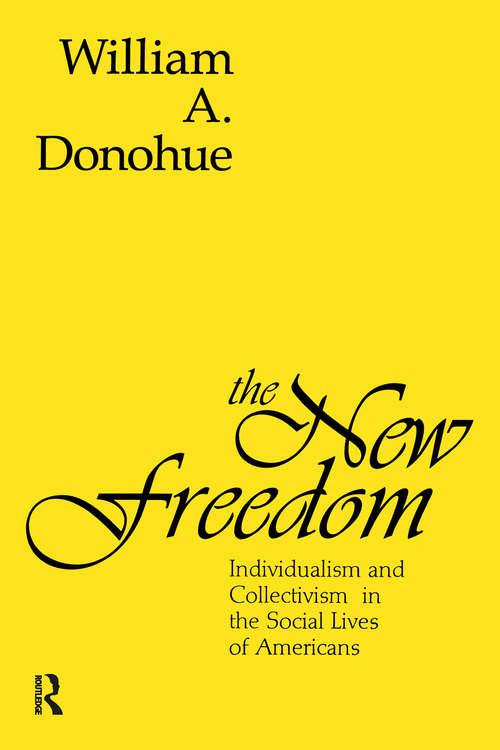 The root cause of contemporary American psychological and social disorders, argues William Donohue in this major new book, is the dominant culture's embracement of a fraudulent conception of freedom. In fact, the tension between an individual liberty without limits and the social need for civility and community has created havoc in the lives of many Americans.Conventional wisdom about the nature of freedom is characterized by both the uncoupling of a concept of rights from a concept of responsibilities and by an overweening doctrine of moral neutrality. This preoccupation with individual liberty, to the neglect of other competing values, has left a trail of social discord that will be difficult to redress. Constraint of any kind is now seen as the enemy of liberty, and all that limits or burdens the individual in any way is seen as anathema to freedom.The New Freedom critically examines how this new concept of freedom developed historically and why it exploded on the American scene in the 1960s. Its impact on the deepest recesses of American society, including marriage, the family, sexuality, the schools, the churches, and the criminal justice system, are fully explored. The costs have been high. Information on the psychological and social health of Americans suggests that all is not well. But the ultimate cost, says Qonohue, may be the ultimate failure of liberty, as the fraudulent new freedom collides with the human need for community.Sure to be controversial, The New Freedom will provide policymakers, social scientists, and specialists in the family, education, and religion a compelling new perspective on old questions. The book will also appeal to general readers who seek to understand the root causes of the nation's unprecedented volume of social and psychological problems.