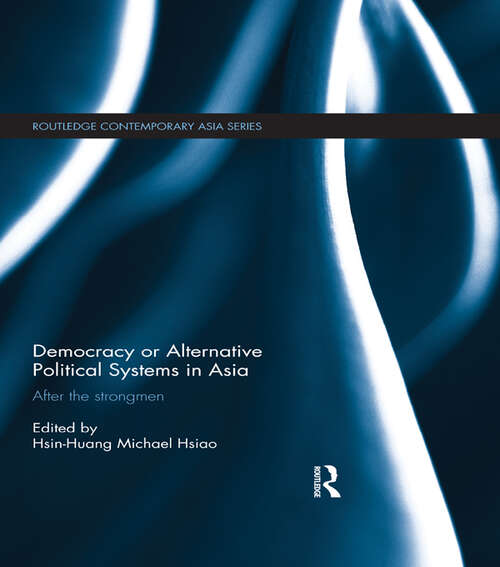 From the 1980s onwards, a tide of democratization swept across the Asian region, as the political strongmen who had led since the end of World War II began to fall. Although it is generally assumed that once authoritarian leaders no longer hold power, the political landscape will drastically change and the democratic transition will simply be a matter of time, this book shows that the move towards democracy in Asia has by no means been linear process, and there have been a number of different outcomes that reflect the vastly divergent paths towards liberalization the Asian nations have followed.

This book examines seven countries that were previously under authoritarian or semi-authoritarian rule, but then followed very different trajectories towards increasing liberalization after the fall of political strongmen: South Korea, Taiwan, China, the Philippines, Indonesia, Malaysia and Thailand. Importantly, the case studies reveal the factors that may enable transition to a more democratic system, and alternatively, the factors that inhibit democratic transition and push countries down a more authoritarian path. In turn, three key models that follow the fall of a political strongman emerge: democratization with substantial political reform and consolidation; democratization with limited political reform, leading to weak democratic institutions and instability; and an alternative political system with sustained authoritarianism. By tracing these very different paths and outcomes in the wake of a strongman’s fall, the contributors present valuable information for countries on the course towards democratization, as well as governments and organisations who work to facilitate this process.

This book will be welcomed by students and scholars interested in Asian politics, governance and democratization studies.