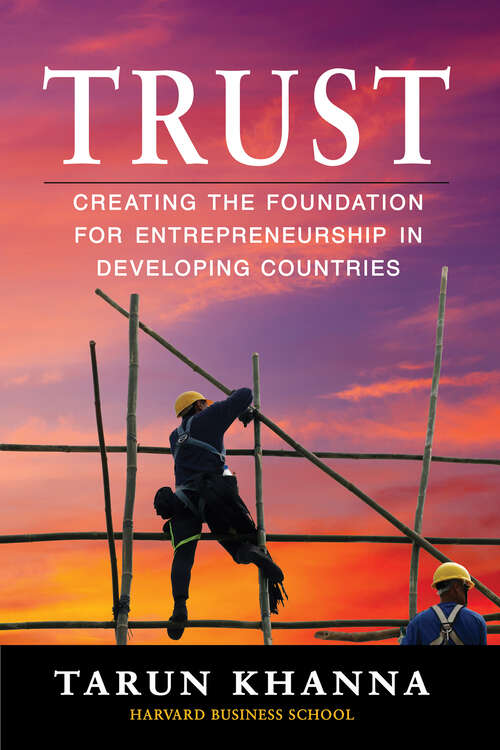 TrustCreating the Foundation for Entrepreneurship in Developing CountriesEntrepreneurial ventures often fail in the developing world because of the lack of something taken for granted in the developed world: trust. Over centuries the developed world has built up customs and institutions like enforceable contracts, an impartial legal system, credible regulatory bodies, even unofficial but respected sources of information like Yelp or Consumer Reports that have created a high level of what scholar and entrepreneur Tarun Khanna calls “ambient trust.” If a product is FDA-approved we feel confident it's safe. If someone makes an untrue claim or breaks an agreement we can sue. Police don't demand bribes to do their jobs. Certainly there are exceptions, but when brought to light they provoke a scandal, not a shrug. This is not the case in the developing world. But rather than become casualties of mistrust, Khanna shows that smart entrepreneurs adopt the mindset that, like it or not, it's up to them to weave their own independent web of trust—with their employees, their partners, their clients, their customers and with society as a whole. This can certainly be challenging, and requires innovative approaches in places where the level of societal mistrust is so high that, as in one example Khanna provides, an official certification of quality simply arouses suspicion—and lowers sales! Using vivid examples from Brazil, China, India, Mexico and elsewhere, Khanna shows how entrepreneurs can build on existing customs and practices instead of trying to push against them. He highlights the role new technologies can play (but cautions that these are not panaceas), and explains how entrepreneurs can find dependable partners in national and local governments to create impact at scale.As far back as the 18th century Adam Smith recognized trust as what Khanna calls “the hidden engine of economic progress.” “Frankness and openness conciliate confidence,” Smith wrote. “We trust the man who seems willing to trust us.” That kind of confidence is critical to entrepreneurial success, but in the developing world entrepreneurs have to establish it through their own efforts. As Khanna puts it, “the entrepreneur must not just create, she must create the conditions to create.”