The War Outside My Window 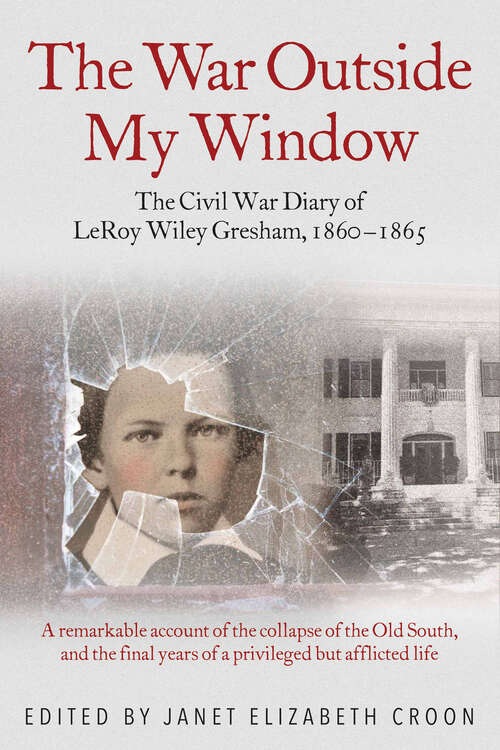 A remarkable account of the collapse of the Old South and the final years of a young boy’s privileged but afflicted life.LeRoy Wiley Gresham was born in 1847 to an affluent slave-holding family in Macon, Georgia. After a horrific leg injury left him an invalid, the educated, inquisitive, perceptive, and exceptionally witty twelve-year-old began keeping a diary in 1860—just as secession and the Civil War began tearing the country and his world apart. He continued to write even as his health deteriorated until both the war and his life ended in 1865. His unique manuscript of the demise of the Old South is published here for the first time in The War Outside My Window.LeRoy read books, devoured newspapers and magazines, listened to gossip, and discussed and debated important social and military issues with his parents and others. He wrote daily for five years, putting pen to paper with a vim and tongue-in-cheek vigor that impresses even now, more than 150 years later. His practical, philosophical, and occasionally Twain-like hilarious observations cover politics and the secession movement, the long and increasingly destructive Civil War, family pets, a wide variety of hobbies and interests, and what life was like at the center of a socially prominent wealthy family in the important Confederate manufacturing center of Macon. The young scribe often voiced concern about the family’s pair of plantations outside town, and recorded his interactions and relationships with servants as he pondered the fate of human bondage and his family’s declining fortunes.Unbeknownst to LeRoy, he was chronicling his own slow and painful descent toward death in tandem with the demise of the Southern Confederacy. He recorded—often in horrific detail—an increasingly painful and debilitating disease that robbed him of his childhood. The teenager’s declining health is a consistent thread coursing through his fascinating journals. “I feel more discouraged [and] less hopeful about getting well than I ever did before,” he wrote on March 17, 1863. “I am weaker and more helpless than I ever was.” Morphine and a score of other “remedies” did little to ease his suffering. Abscesses developed; nagging coughs and pain consumed him. Alternating between bouts of euphoria and despondency, he often wrote, “Saw off my leg.”The War Outside My Window, edited and annotated by Janet Croon with helpful footnotes and a detailed family biographical chart, captures the spirit and the character of a young privileged white teenager witnessing the demise of his world even as his own body slowly failed him. Just as Anne Frank has come down to us as the adolescent voice of World War II, LeRoy Gresham will now be remembered as the young voice of the Civil War South.Winner, 2018, The Douglas Southall Freeman Award