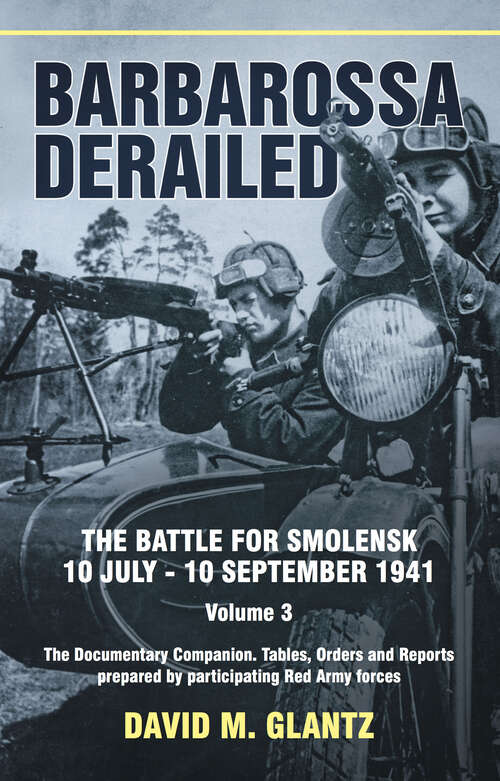 The supplemental companion to a two-part study on Operation Barbarossa, Hitler’s plan to invade Soviet Russia during World War II.Volume three, the Documentary Companion to Barbarossa Derailed, contains the documentary evidence for the two volumes of narrative. In addition to key Führer Directives issued by Adolf Hitler to provide direction to his forces during the Barbarossa Campaign, as well as vital orders issued by German Army Group Center, this book includes the daily operational summaries of the participating Soviet fronts, armies, and some divisions and many if not most of the orders and reports issued by the struggling Soviet armies. Precise translations illustrate not only the capabilities and states-of-mind of key Soviet commanders as they dealt with crisis after crisis but also the characteristics (such as aggressiveness, passivity, brutality, and despair) of their varied styles of command. They also demonstrate how an army, which lost the bulk of its experienced troops during the first several months of the campaign, attempted to use its operational directives and tactical orders to educate its soldiers and officers in the basics of waging war in the midst of active and bloody operations.Praise for Barbarossa Derailed“A meticulous operational narrative covering a key Eastern Front campaign . . . Glantz certainly succeeds in providing the best account of Smolensk to date.” —Parameters - The US Army War College Quarterly  “Both author and publisher are to be congratulated for producing such a detailed and comprehensive study of what could turn out to be one of the seminal battles of the Soviet-German War. Given the amount of Russian material in this volume and, presumably, in the volumes still be published, taking all four volumes collectively, this will hopefully mean a more objective and factually accurate description of the roles of both major combatants in the early opening phase of the war on the Eastern Front  and may well cause others to re-examine the Battle and assess its overall importance to the eventual victory of the USSR.” —Dr. Steven J Main, DefAc UK, British Army Review   “With Barbarossa Derailed, Glantz has provided the specialist on the Soviet-German War with an excellent study of this early conflict that served as an incubator for Soviet victory.” —Canadian Slavonic Papers “A necessary and valuable addition to the English-language literature on the Great Patriotic War. It includes a wealth of documents never before available in English, and it substantially revises earlier accounts of the Battle of Smolensk.” —Journal of Military History