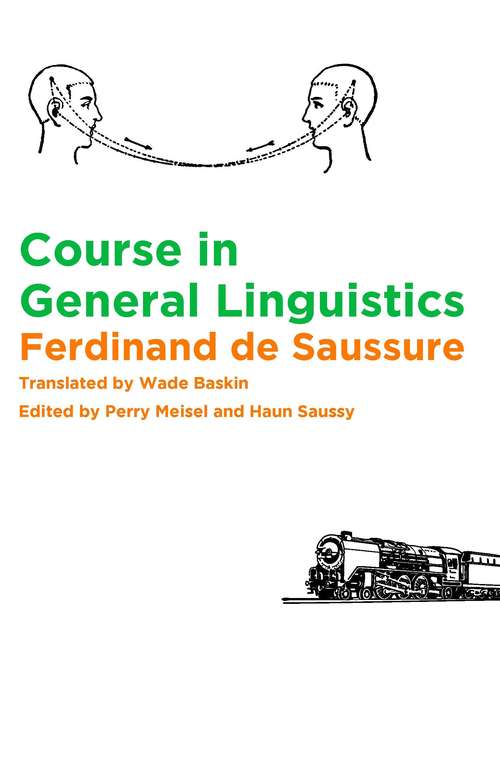 This new edition of Ferdinand de Saussure'sCourse in General Linguistics (1916) is the first critical edition of Saussure to appear in English. It also restores Wade Baskin's delightful original English translation (1959), which has long been unavailable. The founder of modern linguistics, Saussure inaugurated semiology, structuralism, and deconstruction and made possible the work of Jacques Lacan, French feminism, cultural studies, New Historicism, and postcolonialism. Based on the lectures that Saussure gave at the end of his life at the University of Geneva, the text of theCoursewas collated from notes taken by Saussure's students and published by Charles Bally, Albert Sechehaye, and Albert Riedlinger. Saussure traces the rise and fall of the historical linguistics in which he was trained, the synchronic or structural linguistics with which he replaces it, and the new look of diachronic linguistics subsequent to this change in scholarly perspective. Most important, Saussure presents the general principles of a new linguistic science which includes among its achievements the invention of semiology: the theory of the "signifier," the "signified," and the "sign" which they combine to produce. Relaunching Baskin's translation restores these terms and makes Saussure's thought once again clear and accessible. Baskin's translation allows readers to experience how Saussure shifts the theory of reference from mimesis to performance and expands the purview of poetics to include all media, including life sciences and environmentalism. The introduction to this new edition situates Saussure's position in the history of ideas and describes the history of scholarship that made theCourse in General Linguisticslegendary. New endnotes enlarge Saussure's contexts well beyond linguistics to include literary criticism, cultural studies, and philosophy.