The Swamp Fox - Francis Marion#s Campaign in the Carolinas 1780 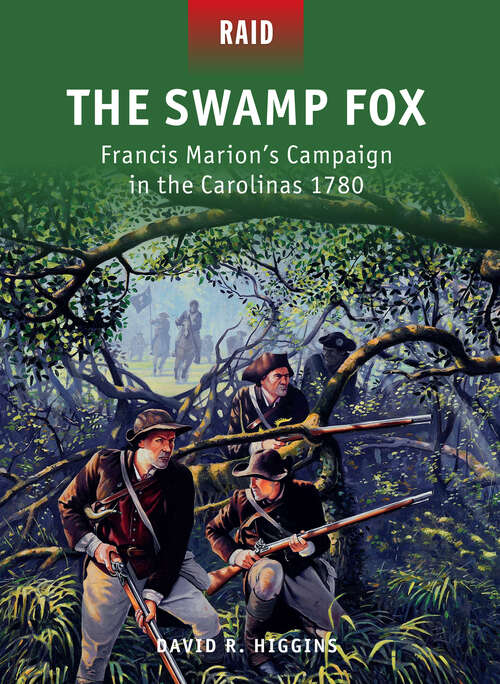 The American Revolution was deadlocked in the north, and after the battle at Monmouth Courthouse in 1778 the focus of the conflict shifted south. Following-up on his decisive May 12, 1780 victory at Charleston, South Carolina, Cornwallis launched a campaign through the Carolinas that was designed to expel American Continental and militia forces from the southern theater. With a second British victory at Camden in August, conventional American forces adopted a policy of avoiding another large battle in favor of smaller, more limited operations. As regular forces were constrained by traditional logistics and organization, soldiers like Francis Marion were able to inflict numerous raids and skirmishes against British and Loyalist forces, after which they would dissolve to form and fight at a later time. Cornwallis subsequently directed contingents to secure the countryside and capture such leaders, but the Patriot victory at King's Mountain (October), forced him to withdraw into South Carolina in what was one of the turning points in the Revolutionary War.

To the southeast, Francis Marion continued his hit-and-run operations in which his band rescued American prisoners at Nelson's Ferry, dispersed Loyalist forces at Blue Savannah (September), and defeated a British outpost at Black Mingo (September). When Marion defeated Loyalist militia at Tearcoat Swamp in October, Cornwallis responded to this string of raids across northeastern South Carolina by assigning his aggressive cavalry commander, Banastre Tarleton, to capture or kill the rebel guerrilla commander. What followed was an unsuccessful two-week pursuit of the elusive Marion, in which Tarleton practiced a scorched-earth policy that ultimately disillusioned Loyalist sympathizers and hurt the British cause in the Carolinas.

Unlike much of the Revolutionary War in the north, the fighting in the Carolinas was generally less civilized and brutal, with Loyalists and Rebels in roughly equal numbers. Except for Cornwallis' British regulars and Greene's Continental army, militias and irregular forces were the norm. A Raid book covering the Marion/Tarleton (British) struggle would be used to showcase this style of frontier warfare, and how its combatants were supplied, organized, and operated. Although not a single, defined raid, the series of actions between August and November 1780 illustrate Marion's unconventional, yet successful, efforts to hinder their enemy's war effort in the south, and Tarleton's equally irregular efforts to counter it.