A Year in the Life of the Supreme Court 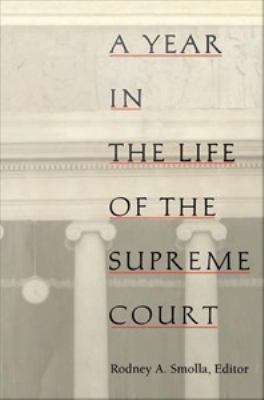 Despite its importance to the life of the nation and all its citizens, the Supreme Court remains a mystery to most Americans, its workings widely felt but rarely seen firsthand. In this book, journalists who cover the Court--acting as the eyes and ears of not just the American people, but the Constitution itself--give us a rare close look into its proceedings, the people behind them, and the complex, often fascinating ways in which justice is ultimately served. Their narratives form an intimate account of a year in the life of the Supreme Court. The cases heard by the Surpreme Court are, first and foremost, disputes involving real people with actual stories. The accidents and twists of circumstance that have brought these people to the last resort of litigation can make for compelling drama. The contributors to this volume bring these dramatic stories to life, using them as a backdrop for the larger issues of law and social policy that constitute the Court's business: abortion, separation of church and state, freedom of speech, the right of privacy, crime, violence, discrimination, and the death penalty. In the course of these narratives, the authors describe the personalities and jurisprudential leanings of the various Justices, explaining how the interplay of these characters and theories about the Constitution interact to influence the Court's decisions. Highly readable and richly informative, this book offers an unusually clear and comprehensive portrait of one of the most influential institutions in modern American life.