The Edge of Armageddon 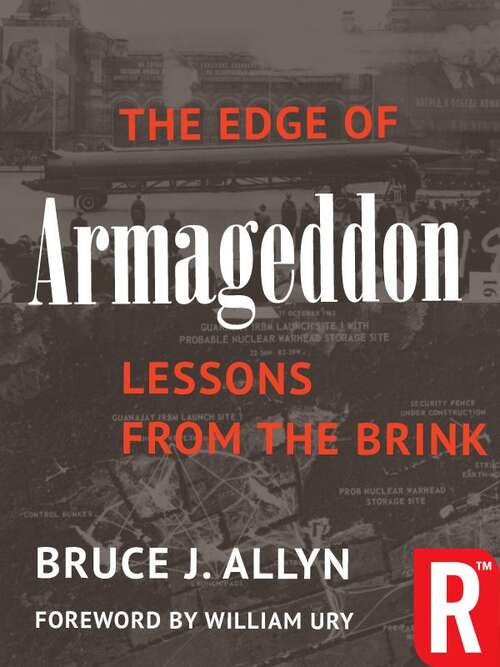 "The Edge of Armageddon shares for the first time the behind-the-scenes stories of how Bruce Allyn worked to bring together former enemies to talk about the past in order to create a more peaceful future. The lessons that my father Nikita Khrushchev learned, and that John F. Kennedy and other veterans of the Cuban Missile Crisis learned, are as relevant today as in 1962."

"Truly captivating, it reads like a page turner, using insiders' history of the Cold War to illuminate how we pulled back from the brink then and how we can deal effectively and peacefully with our differences now."

--WILLIAM URY, Co-Author of Getting to Yes, Author of The Third Side and Co-Founder of the Harvard Program on Negotiation

Historian Arthur Schlesinger, Jr. called the Cuban Missile crisis, "the most dangerous moment in human history." Bruce Allyn was five years old when it happened but in 1989 would organize and participate in a Moscow meeting with the key living members of the 1962 crisis: Soviet Foreign Minister Andrei Gromyko, the former U.S. Ambassador Anatoly Dobrynin, and Sergei Khrushchev, who had edited the secret memoirs of his father, Soviet Premier Nikita Khrushchev. The United States was represented at the meeting by former U.S. Defense Secretary Bob McNamara, former National Security Advisor McGeorge Bundy and former Kennedy Special Counsel Ted Sorensen. Fidel Castro sent his top Politburo member and a key Army General to the Moscow meeting and he then personally hosted the fascinating final dialogue in Havana.

Allyn brings to life through the participants' own words the critical lessons they learned when they stood on the brink of nuclear Armageddon in 1962.

The Edge of Armageddon is "you are there" history with the players who made history. Along the way, we learn how the KGB made a serious effort to try to recruit Allyn to spy for the Soviet Union.

Bruce Allyn has for three decades served as a mediator and advisor on political and economic reform in global hotspots in the former Soviet Union, Middle East and Africa.

Fluent in Russian from his study of Russian literature in college, Allyn was fortunate to be chosen in 1983 as the bilingual "rapporteur" for a new Harvard-Soviet Joint Study on Crisis Prevention. He would begin dozens of trips to Moscow where he developed close relationships with key Soviet reformers, who later became Mikhail Gorbachev's top advisors and ministers. For the six years Gorbachev was in office, Allyn worked with the Soviet President's inner circle on reform and to convene the historic meetings of the key participants in the 1962 missile crisis. Appointed Director of the Harvard-Soviet Joint Study, Allyn would publish with his colleagues the shocking revelations about how close the world came to nuclear war in the acclaimed Cuba on the Brink: Castro, the Missile Crisis and the Soviet Collapse (Pantheon 1993), which commentators hailed as enlightening and authentic "history by those who made it."

Allyn received a Ph.D. in Political Economy and an M.A. in Soviet Studies from Harvard and an M.A. in Philosophy and Politics from Oxford University.

His other publications include Windows of Opportunity: From Cold War to Peaceful Competition in U.S.-Soviet Relations (Harper and Row, 1989) and Back to the Brink: Proceedings of the Moscow Conference on the Cuban Missile Crisis (Harvard University, 1992). He is a contributor to the classic college text The Use of Force: Military Power and International Relations (Rowman and Littlefield, 2009).