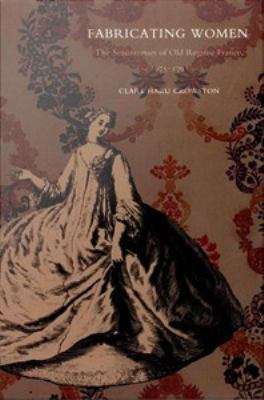 Winner of the 2002 Berkshire Prize, presented by the Berkshire Conference of Women Historians Fabricating Women examines the social institution of the seamstresses' guild in France from the time of Louis XIV to the Revolution. In contrast with previous scholarship on women and gender in the early modern period, Clare Haru Crowston asserts that the rise of the absolute state, with its centralizing and unifying tendencies, could actually increase women's economic, social, and legal opportunities and allow them to thrive in corporate organizations such as the guild. Yet Crowston also reveals paradoxical consequences of the guild's success, such as how its growing membership and visibility ultimately fostered an essentialized femininity that was tied to fashion and appearances. Situating the seamstresses' guild as both an economic and political institution, Crowston explores in particular its relationship with the all-male tailors' guild, which had dominated the clothing fabrication trade in France until women challenged this monopoly during the seventeenth century. Combining archival evidence with visual images, technical literature, philosophical treatises, and fashion journals, she also investigates the techniques the seamstresses used to make and sell clothing, how the garments reflected and shaped modern conceptions of femininity, and guild officials' interactions with royal and municipal authorities. Finally, by offering a revealing portrait of these women's private lives--explaining, for instance, how many seamstresses went beyond traditional female boundaries by choosing to remain single and establish their own households--Crowston challenges existing ideas about women's work and family in early modern Europe. Although clothing lay at the heart of French economic production, social distinction, and cultural identity, Fabricating Women is the first book to investigate this immense and archetypal female guild in depth. It will be welcomed by students and scholars of French and European history, women's and labor history, fashion and technology, and early modern political economy.