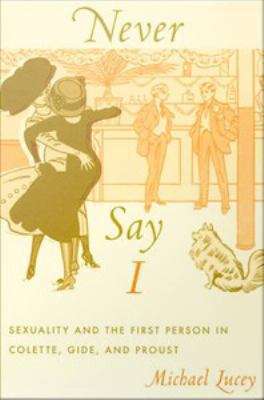 Never Say I reveals the centrality of representations of sexuality, and particularly same-sex sexual relations, to the evolution of literary prose forms in twentieth-century France. Rethinking the social and literary innovation of works by Marcel Proust, Andr Gide, and Colette, Michael Lucey considers these writers' production of a first-person voice in which matters related to same-sex sexuality could be spoken of. He shows how their writings and careers took on political and social import in part through the contribution they made to the representation of social groups that were only slowly coming to be publicly recognized. Proust, Gide, and Colette helped create persons and characters, points of view, and narrative practices from which to speak and write about, for, or as people attracted to those of the same sex. Considering novels along with journalism, theatrical performances, correspondences, and face-to-face encounters, Lucey focuses on the interlocking social and formal dimensions of using the first person. He argues for understanding the first person not just as a grammatical category but also as a collectively produced social artifact, demonstrating that Proust's, Gide's, and Colette's use of the first person involved a social process of assuming the authority to speak about certain issues, or on behalf of certain people. Lucey reveals these three writers as both practitioners and theorists of the first person; he traces how, when they figured themselves or other first persons in certain statements regarding same-sex identity, they self-consciously called attention to the creative effort involved in doing so.