The Power of Boldness 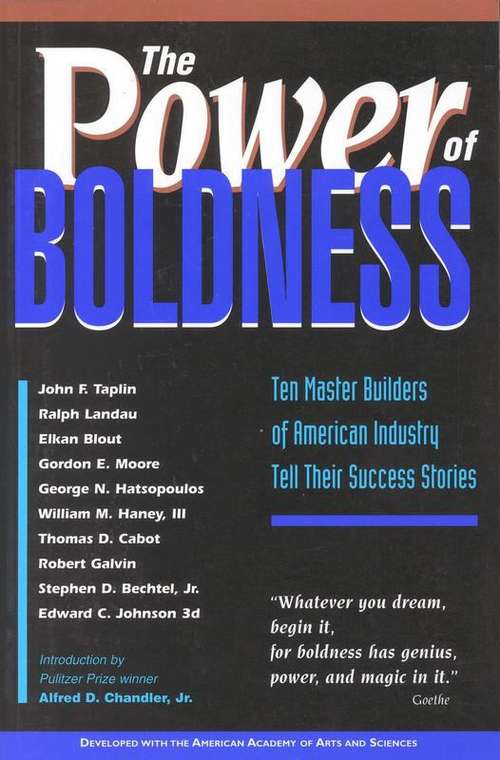 Whatever you dream, begin it, for boldness has genius, power and magic in it. -Goethe What qualities brought America to its dominance of world industry? How will American technology fare in the new global marketplace? What upbringing, education, and personal traits are required to produce leaders who can succeed in this new world? Scan the bookstore shelves and you'll see dozens of attempts by authors to capture the essence of leadership and entrepreneurial success. In The Power of Boldness, the answers come from original sources: ten of the country's most successful business leaders, who share their experiences and insights in individual essays that are remarkable for their directness and personal detail. Six of the writers are inventors who created the enterprises to commercialize their ideas--four assumed management of their fathers' companies and moved into new industrial and geographic markets. Born between 1897 and 1962, these outstanding figures collectively chronicle America's industrial rise since World War II--and share their perspectives on what lies ahead in the age of technology. In engaging and often humorous terms, these men describe how they managed to make the most of the economic and social ups and downs of the past decades--how boldness, clear thinking, and a willingness to learn saw them through the bad times and paved the way to their success. No other book gathers so distinguished a group of business figures-- Stephen D. Bechtel, Jr., of Bechtel Group describes the rise, decline, and rise again of the world's largest heavy construction company. William M. Haney, III, of Molten Metal Technology--a strong believer in Goethe's maxim--overviews the opportunities in ecotechnology. Edward C. Johnson 3d, of Fidelity writes on the adventures of a "contrarian" in the financial arena. Gordon E. Moore of Intel explains how his firm became one of the world's largest producers of microprocessor chips and forecasts the future of the electronics industry. John F. Taplin, master inventor and founder of a number of companies, writes on the education of an inventor/entrepreneur. Thomas D. Cabot of Cabot Corporation, Robert Galvin of Motorola, George N. Hatsopoulos of Thermo Electron Corporation, and Ralph Landau of Halcon International, round out this group of master builders of America's industrial power. In an introduction and summing-up, Alfred Chandler, Jr., Pulitzer Prize-winning business historian, explores some of the themes that emerge from the personal essays. Capturing the spirit of innovation as well as the practicalities of business decision making, The Power of Boldness will be required reading for business executives, students of business, and anyone interested in the individual success stories behind America's technological leadership.

Copyright:
1996 the American Academy of Arts and Sciences.