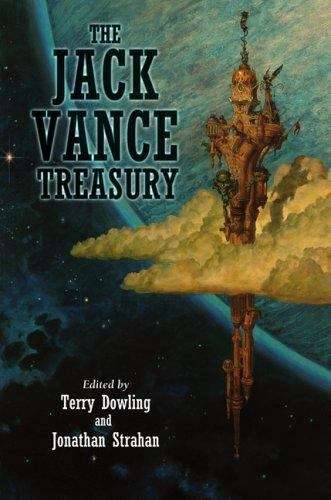 A massive (over 230,000 words) gathering of fiction by the master of science-fantasy. From his first published story "The World Thinker" in 1945 to his final novel Lurulu in 2004, Vance has shown an astonishing range of inventiveness, versatility and sheer storytelling power, as well as a gift for language and world-building second to none. Winner of the Hugo, Nebula, World Fantasy and Edgar awards, his acclaimed first book The Dying Earth and its sequels helped shape the face of modern heroic fantasy for generations of readers--and writers! In more than sixty novels, he has done more than any other author to define science fantasy and its preeminent form: the planetary adventure.

Born in San Francisco in 1916, Vance wrote much of what you'll find between these covers both abroad and at home in the hills above Oakland, either while serving in the merchant marine or traveling the world with his wife Norma, all the while pursuing his great love of fine cuisine and traditional jazz.

Now, at last, the very best of Vance's mid-length and shorter work has been collected in a single landmark volume. With a Preface by Vance himself and a foreword by long-time Vance reader George R.R. Martin, it stands as the capstone to a splendid career and makes the perfect introduction to a very special writer.