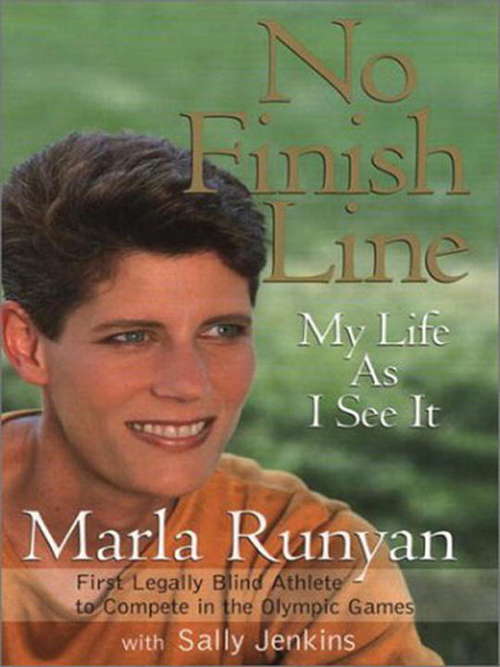 "Blind? I think there's no doubt that Marla Runyan can see things much clearer than most of us with 20/20 vision. " - Lance Armstrong

Marla Runyan was nine years old when she was diagnosed with Stargardt's disease, an irreversible form of macular degeneration. With the uneasy but unwavering support of her parents, she refused to let her diagnosis limit her dreams. Despite her severely impaired, ever-worsening vision, Marla rode horseback and learned to play the violin. And she found her true calling in sports. A gifted and natural athlete, Marla began to compete in the unlikeliest event of all: the heptathlon, the grueling women's equivalent of the decathlon, consisting of seven events: the 200-meter dash, high jump, shot put, 100-meter hurdles, long jump, javelin throw, and 800-meter run. In 1996, she astonished the sports world by qualifying for the U. S. Olympic Trials and, along the way, set the American record for heptathlon 800. It was then that she decided to concentrate on her running. Four years of intense effort paid off. In 2000, she qualified for the U. S. Olympic team by finishing third in the 1,500 meters. In Sydney, she placed eighth in the finals, the top American finisher - the highest women's placing for the United States in the event's history. With self-deprecation and surprising wit, Marla reveals what it's like to see the world through her eyes, how it feels to grow up "disabled" in a society where expectations are often based on perceived abilities, and what it means to compete at the world-class level despite the fact that - quite literally, for her - there is no finish line.