Cat In A Diamond Dazzle (A Midnight Louie Mystery) 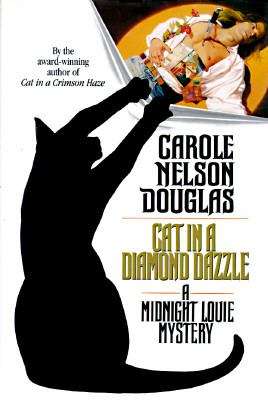 Cat in a Diamond Dazzle is the eagerly awaited fifth volume in the Midnight Louie mystery series. Readers have fallen in love with Louie, the tough, tousle-eared black Las Vegas tomcat, dubbed "an irresistible combination of Nathan Detroit and Sam Spade" by Mostly Murder, and with Temple Barr, his human companion, a petite redheaded public relations expert whose fondness for high-heeled shoes is matched only by her aptitude for getting into trouble.

And there are troubles aplenty in Temple's life right now--from the stage magician ex-boyfriend who suddenly shows up, and whom the police would love to question about a murder he probably didn't commit, to her handsome neighbor who's proving to be quite a distraction.

Temple decides she's had enough of troubles... and men. She'll leave reality and escape to fantasy by fleeing to a romance writers' convention held in Las Vegas's most dazzling hotel, the Crystal Palace.

At the convention, Temple becomes entangled with the male-model Incredible Hunk pageant, writers' rivalries, along-lost relative, and a treasure hunt for a pair of dazzling crystal shoes with black cats on the heels. It's all good, relatively clean fun...until one of the would-be Fabios turns up dead. Temple's investigations into these matters soon become much more complicated--and much more dangerous--than she had planned.

Luckily, there's a smart and smart-mouthed cat prowling around....