Cat with an Emerald Eye (A Midnight Louie Mystery) 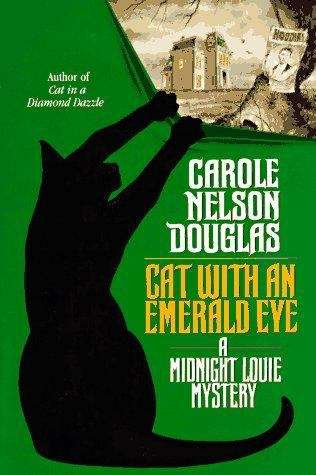 Carole Nelson Douglas's beloved sleuth is back in this sixth volume of the acclaimed Midnight Louie series. Our furry feline friend has dipped his paws into the muddy waters of murder once again--only this time, nothing is as it seems.

Temple Barr, a redheaded public relations expert and Louie's human partner in detection, won't be trick-or-treating this Halloween Eve in Las Vegas: Her landlady, the eccentric Electra, is dragging her along to a séance intended to resurrect the spirit of Harry Houdini. Midnight Louie scoffs, as any sensible cat would do, but when the séance ends abruptly with the murder of a famous psychic, his well-trained nose smells something fishy, and it's not his dinner. When Temple discovers that the dead man was a debunker of false psychic phenomena, making any other supposed psychic in the room a prime suspect, she knows there's more to this case than meets the eye.

Enter Mystifying Max the Magician, Temple's ex-lover and the victim's ex-student, who obviously knows more than he's telling about the murder. When Max gets in Temple's way, tampering with her emotions as well as with her crime scene, Louie realizes it's up to him to get to the bottom of this--before they find themselves at the bottom of a grave.