In The Company Of Men 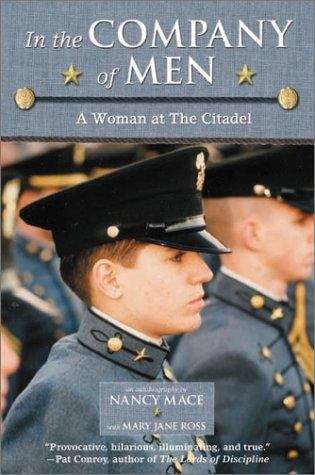 "Leaning forward until I could feel his breath on the back of my neck he began to rack me in an insidious, threatening manner. 'We all hate you. When are you going to leave? We hate you, do you hear me?'...On and on the voice went, and for the first time since I had come to the school, I was afraid, afraid and disgusted."

When Nancy Mace entered The Citadel, the United States government had just recently overturned the ruling that women were not allowed to enter the "Core of Cadets." Having grown up in a military family, Nancy was not unfamiliar with the harsh realities of military life. Her father, a brigadier general, had graduated from The Citadel and her older sister was a military graduate, but it would be Nancy's journey alone. And as many a knob has found out, life inside the dazzling white ramparts of this famous fortress is far from pleasant. Upon entering those grand gates, Nancy Mace soon found out that she wasn't just fighting the tradition of the corps, but the culture and city that surrounded it. Steeped in tradition and lore, the grand bastion known as El Cid is considered one of the South's most infamous and controversial institutions. Built in 1842, it has turned out a unique brand of Southern man -- and now woman. This is the true first-person account of a young woman's battle to be a part of the long gray line.