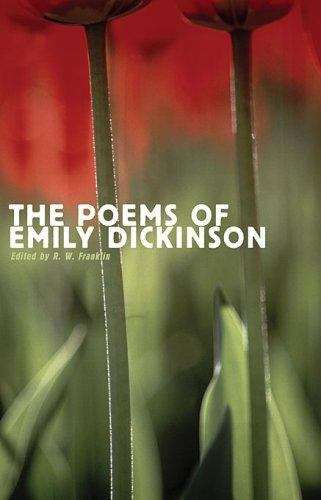 Emily Dickinson, poet of the interior life, imagined words/swords, hurling barbed syllables/piercing. Nothing about her adult appearance or habitation revealed such a militant soul. Only poems, written quietly in a room of her own, often hand-stitched in small volumes, then hidden in a drawer, revealed her true self. She did not live in time but in universals--an acute, sensitive nature reaching out boldly from self-referral to a wider, imagined world. Dickinson died without fame; only a few poems were published in her lifetime. Her legacy was later rescued from her desk--an astonishing body of work, much of which has since appeared in piecemeal editions, sometimes with words altered by editors or publishers according to the fashion of the day. Now Ralph Franklin, the foremost scholar of Dickinson's manuscripts, has prepared an authoritative one-volume edition of all extant poems by Emily Dickinson--1,789 poems in all, the largest number ever assembled. This reading edition derives from his three-volume work, The Poems of Emily Dickinson: Variorum Edition (1998), which contains approximately 2,500 sources for the poems. In this one-volume edition, Franklin offers a single reading of each poem--usually the latest version of the entire poem--rendered with Dickinson's spelling, punctuation, and capitalization intact. The Poems of Emily Dickinson: Reading Edition is a milestone in American literary scholarship and an indispensable addition to the personal library of poetry lovers everywhere.