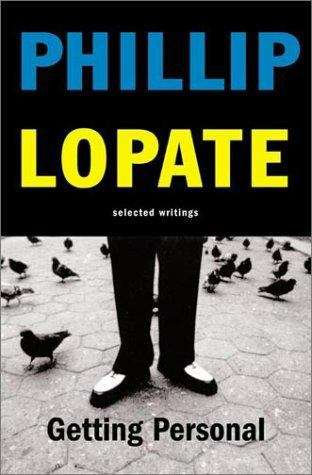 From the man whose name is virtually synonymous with the contemporary personal essay, "Getting Personal" is a rich and ambitious collection that spans Phillip Lopate's career as an essayist, teacher, film critic, father, son and husband. Lauded as one of America's foremost essayists, a writer who was instrumental in focusing attention on the form, Lopate here admirably demonstrates the obligation to be engaging as well as honest. Witty, insightful, deeply meditative and self-revelatory, with his characteristic candor and curmudgeonly charm, he explores himself, his life, his family, his religion, and his friends. Organized in six parts and spanning childhood to middle age, these twenty-eight essays tell two stories: the story of Lopate's life and the development of his career as a writer; these essays celebrate the impressive range of his talent. Whether Lopate is examining the perils of living above your landlord, the glorious sweep of the Hudson from the George Washington Bridge, the difficulty of teaching gloomy Chekhov to children, or the lamentable collection of parts that comprise the portrait of his body, he is always thoughtful, wonderfully skeptical, and eloquently engaging. "Getting Personal" stands not only as a guide to Lopate's writing career, but also as an intellectual autobiography, rooted in his experience as one of America's most beloved and respected writers. Lopate is known for his exquisite taste in others essays and a probing revelatory style of his own.