Say No to the Devil 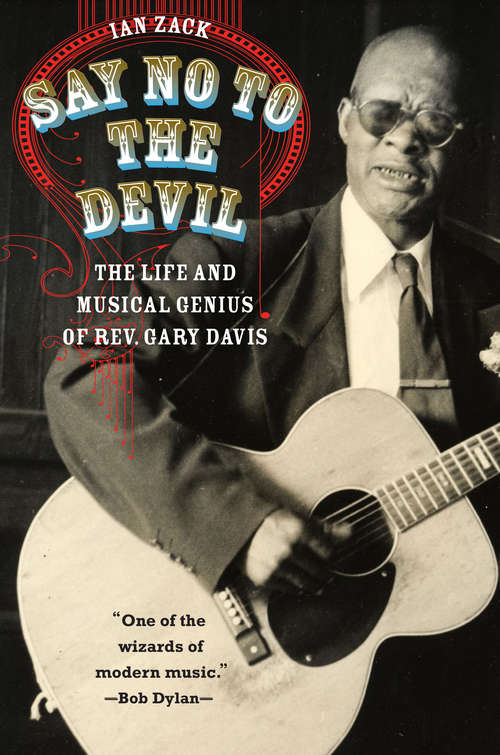 Who was the greatest of all American guitarists?

You probably didn't name Gary Davis, but many of his musical contemporaries considered him without peer. Bob Dylan called Davis "one of the wizards of modern music. " Bob Weir of the Grateful Dead--who took lessons with Davis--claimed his musical ability "transcended any common notion of a bluesman. " And the folklorist Alan Lomax called him "one of the really great geniuses of American instrumental music. " But you won't find Davis alongside blues legends Robert Johnson and Muddy Waters in the Rock and Roll Hall of Fame.

Despite almost universal renown among his contemporaries, Davis lives today not so much in his own work but through covers of his songs by Dylan, Jackson Browne, and many others, as well as in the untold number of students whose lives he influenced.

The first biography of Davis, Say No to the Devil restores "the Rev's" remarkable story. Drawing on extensive research and interviews with many of Davis's former students, Ian Zack takes readers through Davis's difficult beginning as the blind son of sharecroppers in the Jim Crow South to his decision to become an ordained Baptist minister and his move to New York in the early 1940s, where he scraped out a living singing and preaching on street corners and in storefront churches in Harlem.

There, he gained entry into a circle of musicians that included, among many others, Lead Belly, Woody Guthrie, and Dave Van Ronk. But in spite of his tremendous musical achievements, Davis never gained broad recognition from an American public that wasn't sure what to make of his trademark blend of gospel, ragtime, street preaching, and the blues. His personal life was also fraught, troubled by struggles with alcohol, women, and deteriorating health.

Zack chronicles this remarkable figure in American music, helping us to understand how he taught and influenced a generation of musicians.