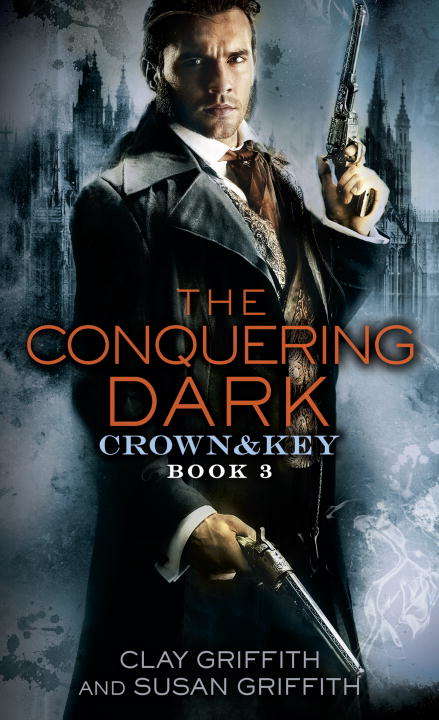 A thrilling new Victorian-era urban fantasy for fans of Kevin Hearne's Iron Druid Chronicles, the Showtime series Penny Dreadful, and the Sherlock Holmes movies featuring Robert Downey, Jr. The Crown and Key Society face their most terrifying villain yet: Gaios, a deranged demigod with the power to destroy Britain. To avenge a centuries-old betrayal, Gaios is hell-bent on summoning the elemental forces of the earth to level London and bury Britain. The Crown and Key Society, a secret league consisting of a magician, an alchemist, and a monster-hunter, is the realm's only hope--and to stop Gaios, they must gather their full strength and come together as a team, or the world will fall apart. But Simon Archer, the Crown and Key's leader and the last living magician-scribe, has lost his powers. As Gaios searches for the Stone of Scone, which will give him destructive dominion over the land, monster-hunter Malcolm MacFarlane, alchemist extraordinaire Kate Anstruther, gadget geek Penny Carter, and Charlotte the werewolf scramble to reconnect Simon to his magic before the world as they know it is left forever in ruins.Praise for Clay and Susan Griffith's The Shadow Revolution "Team Griffith creates a number of really compelling characters whose exploits will keep readers glued to the pages! Terrific!"--RT Book Reviews "A fast-paced, action-filled dark fantasy that is just sheer fun to read . . . The Shadow Revolution kicks off the Crown & Key series in spectacular fashion!"--Fresh Fiction "Werewolves, mad science, and plenty of smiting. Pass the popcorn."--Emma Jane Holloway, author of The Baskerville Affair series "A thrilling read! Clay and Susan Griffith have crafted a gritty, action-packed Victorian-era fantasy world full of dark creatures, mystery, and magic--a must read for steampunk fans!"--Shawntelle Madison, author of the Coveted series "What happens when you kick off a new urban fantasy series with a fantastic setting and unique characters, and you throw in some dangerous, supernatural creatures, evil madmen, murder and mayhem? You get a kick-ass book to read. . . . I want more, please!"--Book Swoon "If summer blockbuster action movies existed back in the Victorian era, they would look a lot like The Shadow Revolution. This book doesn't mess around. . . . Highly recommended."--The BiblioSanctum "One hell of a read . . . [With] unforgettable characters and magic around every bend, this truly was a breath of fresh air."--My Guilty Obsession "The story is pretty fast-paced, the mystery intriguing and refreshingly surprising, and the action thrilling. [The Shadow Revolution] pulls you in and barely lets you up for air, and I love the intensity of that kind of storytelling."--Refracted Light "So good that I won't be surprised if this book series is opted to be a TV show or movie with an accompanying video game! Great storytelling, great plot and most of all great book!"--MarienelaFrom the Paperback edition.