Tales From a Revolution 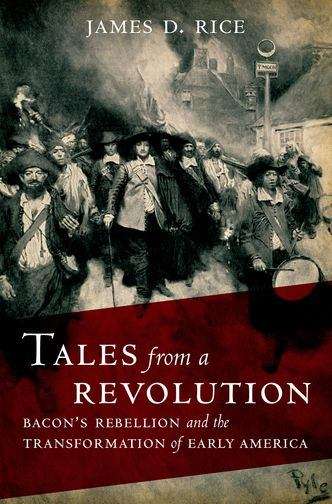 In the spring of 1676, Nathanial Bacon, a hotheaded young newcomer to Virginia, led a revolt against the colony's Indian policies. Bacon's Rebellion turned into a civil war within Virginia - and a war of extermination against the colony's Indian allies - that lasted into the following winter,sending shock waves throughout the British colonies and into England itself. James Rice offers a colorfully detailed account of the rebellion, revealing how Piscataways, English planters, slave traders, Susquehannocks, colonial officials, plunderers and intriguers were all pulled into an escalating conflict whose outcome, month by month, remained uncertain. In Rice's richnarrative, the lead characters come to life: the powerful, charismatic Governor Berkeley, the sorrowful Susquehannock warrior Monges, the wiley Indian trader and tobacco planter William Byrd, the regal Pamunkey chieftain Cockacoeske, and the rebel leader himself, Nathanial Bacon. The dark, slenderBacon, born into a prominent family, soon earned a reputation in America as imperious, ambitious, and arrogant. But the colonial leaders did not foresee how rash and headstrong Nathaniel Bacon could be, nor how adept he would prove to be at both inciting colonists and alienating Indians. As thetense drama unfolds, it becomes apparent that the struggle between Governor Berkeley and the impetuous Bacon is nothing less than a battle over the soul of America. Bacon died in the midst of the uprising and Governor Berkeley shortly afterwards, but the profoundly important issues at the heart ofthe rebellion took another generation to resolve. The late seventeenth century was a pivotal moment in American history, full of upheavals and far-flung conspiracies. Tales From a Revolution brilliantly captures the swirling rumors and central events of Bacon's Rebellion and its aftermath, weaving them into a dramatic tale that is part of thefounding story of America.