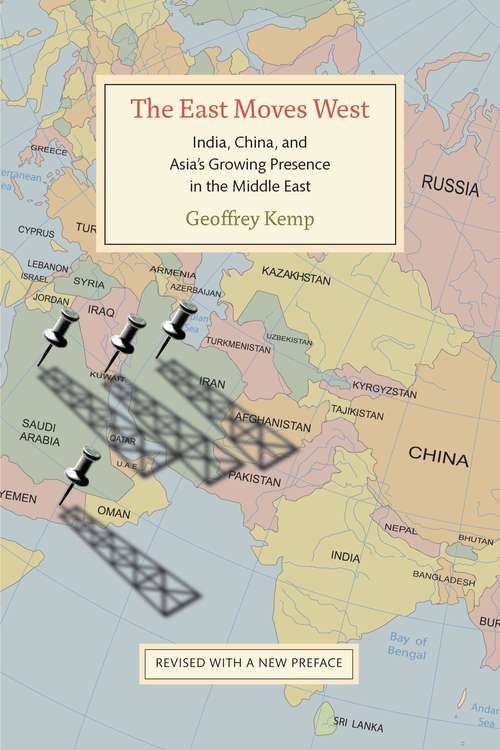 While traditionally powerful Western economies are treading water at best, beset by crises in banking, housing, and employment, industrial growth and economic development are exploding in China and India. The world's two most populous nations are the biggest reasons for Asia's growing footprint on other global regions. The increasing size and impact of that footprint are especially important in the Middle East, an economic, religious, and geopolitical linchpin. The East Moves West details the growing interdependence of the Middle East and Asia and projects the likely ramifications of this evolving relationship. It also examines the role of Pakistan, Japan, and South Korea in the region.Geoffrey Kemp, a longtime analyst of global security and political economy, compares and contrasts Indian and Chinese involvement in the Middle East. He stresses an embedded historical dimension that gives India substantially more familiarity and interest in the region-India was there first, and it has maintained that head start. Both nations, however, are clearly on the rise and leaving an indelible mark on the Middle East, and that enhanced influence has international ramifications for the United States and throughout the world.Does the emergence of these Asian giants-with their increasingly huge need for energy-strengthen the case for cooperative security, particularly in the maritime arena? After all, safe and open sea-lanes remain an essential component of mutually beneficial intercontinental trade, making India and China increasingly dependent on safe passage of oil tankers. Or will we see reversion to more traditional competition and even conflict, given that the major Asian powers themselves have so many unresolved problems and that the future of the U.S. presence in the area is uncertain. Kemp believes the United States will remain the dominant military power in the region but will have to share some security responsibilities with the Asians, especially in the Indian Ocean.

Derechos de autor:
2012 The Center for the National Interest