Teachers versus the Public 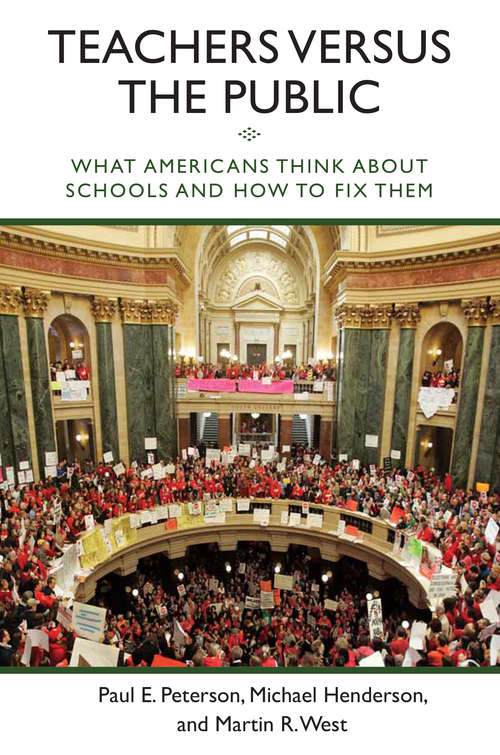 A comprehensive exploration of 21st Century school politics, Teachers versus the Public offers the first comparison of the education policy views of both teachers and the public as a whole, and reveals a deep, broad divide between the opinions held by citizens and those who teach in the public schools. Among the findings: Divisions between teachers and the public are wider and deeper than differences between other groups often thought to contest school policy, such as Republicans and Democrats, the young and the old, the rich and the poor, or African Americans and whites. The teacher-public gap is widest on such issues as merit pay, teacher tenure reform, impact of teacher unions, school vouchers, charter schools, and requirements to test students annually. Public support for school vouchers for all students, charter schools, and parent trigger laws increases sharply when people are informed of the national ranking of student performance in their local school district. Public willingness to give local schools high marks, its readiness to support higher spending levels, and its support for teacher unions all decline when the public learns the national ranking of their local schools. On most issues, teacher opinion does not change in response to new information nearly as much as it does for the public as a whole. In fact, the gap between what teachers and the public think about school reform grows even wider when both teachers and the public are given more information about current school performance, current expenditure levels, and current teacher pay.The book provides the first experimental study of public and teacher opinion. Using a recently developed research strategy, the authors ask differently worded questions about the same topic to randomly chosen segments of representative groups of citizens. This approach allows them to identify the impact on public opinion of new information on issues such as student performance and school expenditures in each respondent's community.The changes in public opinion when citizens receive information about school performance are largest in districts that perform below the national average. Altogether, the results indicate that support for many school reforms would increase if common core state standards were established and implemented in such a way as to inform the public about the quality of their local schools. These and many other findings illuminate the distance between teacher opinions and those of the public at large.About the Research: In partnership with the Harvard Program on Education Policy and Governance and the journal, Education Next, authors Paul E. Peterson, Martin West and Michael Henderson surveyed nationally representative samples of teachers and the public as a whole annually between 2007 and 2013.