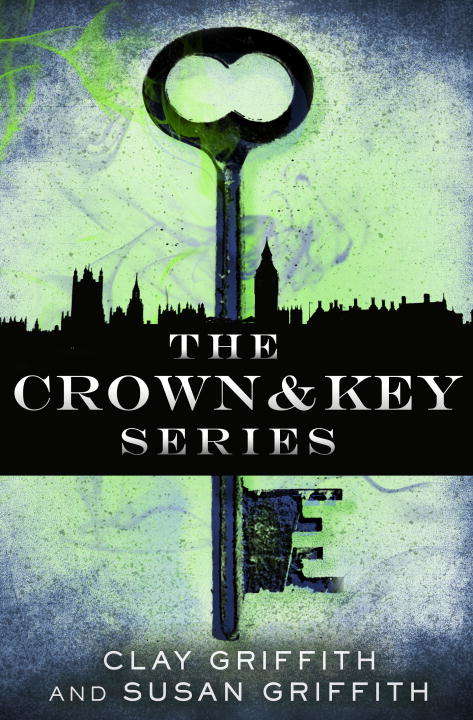 In this action-packed urban fantasy trilogy, the monster-hunters and magician-scribes of the Crown and Key Society are Victorian London's last, best defense against supernatural evil. But they're going to need a lot more silver. Perfect for fans of Kevin Hearne's Iron Druid Chronicles, the Showtime series Penny Dreadful, and the Sherlock Holmes movies featuring Robert Downey, Jr., all three irresistible novels are available in one rollicking ebook bundle: THE SHADOW REVOLUTION THE UNDYING LEGION THE CONQUERING DARK As fog descends, obscuring the gas lamps of London, werewolves prowl the shadows of back alleys. But they have infiltrated the inner circles of upper-crust society as well. Only a handful of specially gifted practitioners are equipped to battle the beasts. Among them are the roguish Simon Archer, who conceals his powers as a spell-casting scribe behind the smooth veneer of a dashing playboy; his layabout mentor, Nick Barker, who prefers a good pub to thrilling heroics; and the self-possessed alchemist Kate Anstruther, who is equally at home in a ballroom as she is on a battlefield. After a lycanthrope targets Kate's vulnerable younger sister, the three join forces with fierce Scottish monster-hunter Malcolm MacFarlane--but quickly discover they're dealing with a threat far greater than anything they ever imagined. Praise for the Crown & Key series "Team Griffith creates a number of really compelling characters whose exploits will keep readers glued to the pages!"--RT Book Reviews "A fast-paced, action-filled dark fantasy that is just sheer fun to read . . . The Shadow Revolution kicks off the Crown & Key series in spectacular fashion!"--Fresh Fiction "Werewolves, mad science, and plenty of smiting. Pass the popcorn."--Emma Jane Holloway, author of the Baskerville Affair series "Clay and Susan Griffith have crafted a gritty, action-packed Victorian-era fantasy world full of dark creatures, mystery, and magic--a must read for steampunk fans!"--Shawntelle Madison, author of the Coveted series "The Undying Legion combines a thrilling well-developed plot with spectacular action sequences, witty banter, and unlikely heroes that are fabulously unique and fascinating."--Goldilox and the Three Weres "Monstrously entertaining."--Wit and Sin, on The Undying Legion "The previous novels, The Shadow Revolution and The Undying Legion, set a high standard that The Conquering Dark not only meets, but surpasses. . . . If you are looking for an exciting fantasy series with memorable characters, look to the Crown & Key trilogy. You won't be disappointed."--The Mutt Cafe "Yet another fantastic addition to the amazing Crown & Key series . . . I didn't want the book to end."--Word Gurgle, on The Conquering Dark