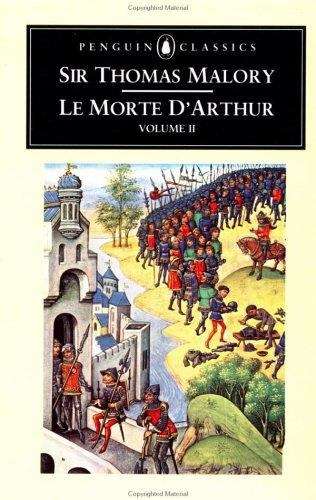 Volume two of Le Morte D'Arthur, Sir Thomas Malory's powerful and elegaic version of the Arthurian legend, recounts the adventures of Sir Tristram de Liones and the treachery of Sir Mordred, and follows Sir Launcelot's quest for The Holy Grail, his fatally divided loyalties, and his great, forbidden love for the beautiful Queen Guenever. Culminating in an account of Arthur's final battle against the scheming, deceitful Mordred, this is the definitive re-telling of the Arthurian myth, weaving a story of adultery, treachery and ultimately—in its tragic finale—death. Edited and published by William Caxton in 1485, Malory's moving prose romance looks back to an idealised Medieval age of chivalry, drawing on French and English verse sources to create an epic masterpiece of passion, enchantment, war and betrayal.

For more than seventy years, Penguin has been the leading publisher of classic literature in the English-speaking world. With more than 1,700 titles, Penguin Classics represents a global bookshelf of the best works throughout history and across genres and disciplines. Readers trust the series to provide authoritative texts enhanced by introductions and notes by distinguished scholars and contemporary authors, as well as up-to-