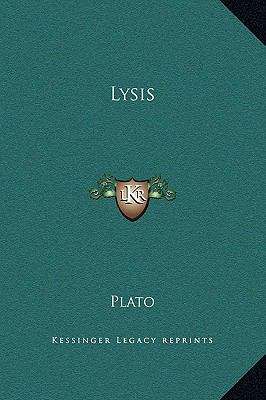 No answer is given in the Lysis to the question, ‘What is Friendship?’ any more than in the Charmides to the question, ‘What is Temperance?’ There are several resemblances in the two Dialogues: the same youthfulness and sense of beauty pervades both of them; they are alike rich in the description of Greek life. The question is again raised of the relation of knowledge to virtue and good, which also recurs in the Laches; and Socrates appears again as the elder friend of the two boys, Lysis and Menexenus. In the Charmides, as also in the Laches, he is described as middle-aged; in the Lysis he is advanced in years.

The Dialogue consists of two scenes or conversations which seem to have no relation to each other. The first is a conversation between Socrates and Lysis, who, like Charmides, is an Athenian youth of noble descent and of great beauty, goodness, and intelligence: this is carried on in the absence of Menexenus, who is called away to take part in a sacrifice. Socrates asks Lysis whether his father and mother do not love him very much? ‘To be sure they do.’ ‘Then of course they allow him to do exactly as he likes.’ ‘Of course not: the very slaves have more liberty than he has.’ ‘But how is this?’ ‘The reason is that he is not old enough.’ ‘No; the real reason is that he is not wise enough: for are there not some things which he is allowed to do, although he is not allowed to do others?’ ‘Yes, because he knows them, and does not know the others.’ This leads to the conclusion that all men everywhere will trust him in what he knows, but not in what he does not know; for in such matters he will be unprofitable to them, and do them no good. And no one will love him, if he does them no good; and he can only do them good by knowledge; and as he is still without knowledge, he can have as yet no conceit of knowledge. In this manner Socrates reads a lesson to Hippothales, the foolish lover of Lysis, respecting the style of conversation which he should address to his beloved.

After the return of Menexenus, Socrates, at the request of Lysis, asks him a new question: ‘What is friendship? You, Menexenus, who have a friend already, can tell me, who am always longing to find one, what is the secret of this great blessing.’