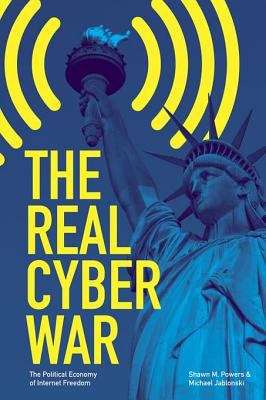 Contemporary discussion surrounding the role of the internet in society is dominated by words like: internet freedom, surveillance, cybersecurity, Edward Snowden and, most prolifically, cyber war. Behind the rhetoric of cyber war is an on-going state-centered battle for control of information resources. Shawn Powers and Michael Jablonski conceptualize this real cyber war as the utilization of digital networks for geopolitical purposes, including covert attacks against another state's electronic systems, but also, and more importantly, the variety of ways the internet is used to further a state's economic and military agendas.

Moving beyond debates on the democratic value of new and emerging information technologies, The Real Cyber War focuses on political, economic, and geopolitical factors driving internet freedom policies, in particular the U.S. State Department's emerging doctrine in support of a universal freedom to connect. They argue that efforts to create a universal internet built upon Western legal, political, and social preferences is driven by economic and geopolitical motivations rather than the humanitarian and democratic ideals that typically accompany related policy discourse. In fact, the freedom-to-connect movement is intertwined with broader efforts to structure global society in ways that favor American and Western cultures, economies, and governments.

Thought-provoking and far-seeing, The Real Cyber War reveals how internet policies and governance have emerged as critical sites of geopolitical contestation, with results certain to shape statecraft, diplomacy, and conflict in the twenty-first century.