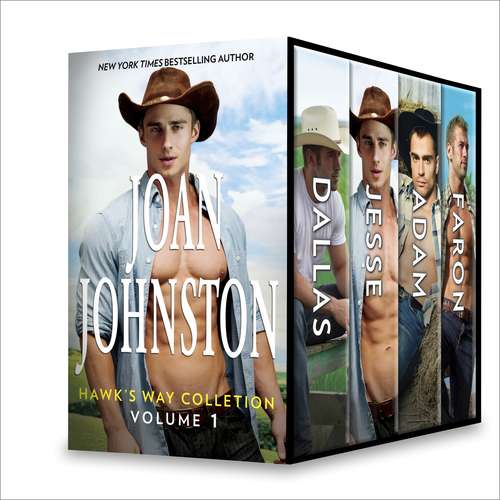 For the first time Hawk's Way's cowboys are in one convenient box set, from New York Times bestselling author Joan Johnston... Dallas Angela owes her life to the Texas Ranger Dallas, but what he doesn't know is she's from 1864. Dallas is fairly sure the woman he's rescued is completely out of her mind. When he meets Angela, over a century worth of differences come crashing together. Still, there's something about her fiery spirit and unmistakable beauty that has him wanting to believe her story. Sometimes, when it comes to falling in love, there's no place to go but the future. Jesse Honey hasn't been the same ever since her husband, a Texas Ranger, died on the job. So when cowboy Jesse Whitelaw turns up on her doorstep looking for work, he seems like the answer to her prayers. Jesse longs to be the man in Honey's life, but he'll do anything to keep his secret hidden. She doesn't know he's really a Ranger himself, and is undercover investigating a cattle-rustling ring. But as they grow closer, it becomes tougher for Jesse to pretend. Can he and Honey obey the law of their own hearts? Adam Tate Whitelaw leaves her overprotective family, and runs straight into the arms of hardened rancher Adam Phillips. Adam has had enough experience with misfits and strays that he knows a damsel in distress when he sees one. He's in no mood to deal with the spirited women, but he can't seem to keep her out of his heart...or his bed. But when Tate's brothers track her down with shotguns in hand, Adam will have to wrangle her heart, before he loses her for good. Faron Belinda Prescott has just inherited a nearly bankrupt ranch...along with Faron Whitelaw, an ill-tempered cowboy. Faron was furious when Belinda informed him about the truth of his parentage: he wasn't one of the Whitelaws of Texas. He wanted to believe that she was nothing more than a gold digger, but all she seemed to want was him... Previously published as A Little Time in Texas, Honey and the Hired Hand, The Rancher and the Runaway Bride, and The Cowboy and The Princess.