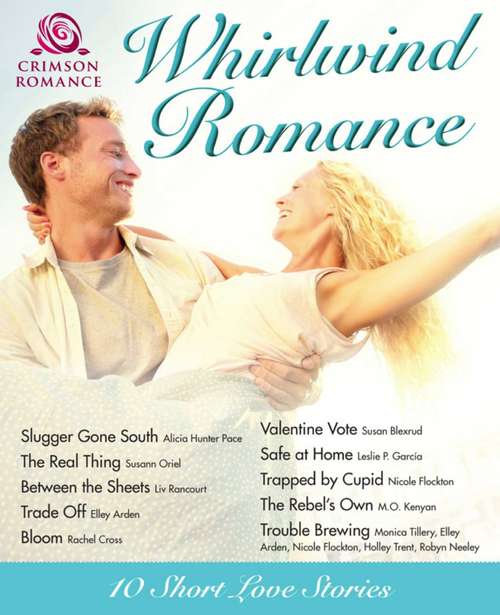 Size doesn't always matter! USA Today best-selling author Alicia Hunter Pace and nine more Crimson Romance stars prove that good things come in small packages with this collection of ten sexy short stories. Whether you're on the subway, in line at the market, or counting the minutes till the kids' soccer practice ends--anywhere and anytime you're in the mood, these Mr. Rights are waiting to sweep you away:Slugger Gone South: When New York Yankee Marc MacNeal comes to Merritt, Alabama, for a charity golf tournament, he's shocked to be reunited with his ex-fiancee, Bailey Watkins. It could be the perfect chance to get some long-awaited closure--or the start of a whole new ball game...The Real Thing: Mac Buchanan and Gemma Gilmore can't keep their hands off each other--until his undercover assignment reveals she's behind an art forgery. But is she faking her responses to him, too?Between the Sheets: An annual retreat is the perfect setting for music teacher Maggie Schafer to turn over a new leaf in her love life, but unfortunately, she's only pretending Randy Devers is her boyfriend this week. Or is she?Trade Off: Traded and jaded, catcher Ben Border is considering stepping out from behind the plate...until he runs into former flame Scarlett Dare. The sexy marketing executive still sends him into a fever pitch, but is she willing to trade Fortune 500 success for a happily ever after?Bloom: When L.A.'s charity fundraising maven Ava Bennett heads out to the middle of nowhere to check on a friend for her rock star client, she never expected to tangle with infamous music producer Nate Robinson, who traded his fast-paced lifestyle for sanity. Can a career woman find love with a virtual hermit?Valentine Vote: Courtney Larson is a lobbyist for the Campaign for Tobacco-Free Kids. Eric Morrison is a U.S senator from a North Carolina tobacco family. They're entrenched on opposing sides of a new tobacco tax, but their sexual tension can't be denied. Can they find common ground on the Senate floor and in the bedroom?Safe at Home: Amanda Warner hates baseball but knows it'll take a swing for the fences to save her dad's hardware store. Hoping his star power will bring the crowds, she sets her sights on Scorpions' all-star Josh "Hotstuff" Arrevalos. But is her heart ready to play ball again?Trapped by Cupid: Cupid's arrow has missed nurse Lisa Wheeler, who is stuck working the late shift with arrogant Dr. Noah Collins. But when this couple gets stuck in a stalled elevator, it turns out the ER's golden boy might just have a secret soft side--and Cupid might have better aim than she thought.The Rebel's Own: Back in high school, a cruel prank left shy Kennedy Bailey pregnant and alone. But now she's gorgeous and grown-up and she won't let anything stop her from saving her five-year-old son's life when he's diagnosed with leukemia. Even if it means confronting his father, NFL quarterback Ryan Carville, who wants a second chance to show he's no longer a spineless boy but a man worth loving.Trouble Brewing: Richard Whitman and Joe Sanders co-founded the WhitSand farm in bucolic Emerald Springs, Washington. But when the duo disagrees on a future direction for their thriving business, a feud brews that will span decades. It's the prequel to Crimson's wildly successful Emerald Springs Legacy series you don't want to miss!Sensuality Level: Sensual