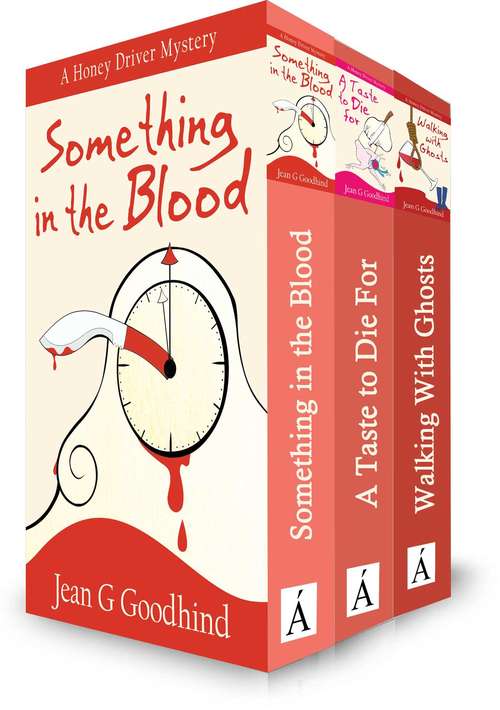 ‘Honey's earnest, charming quirkiness, her sometimes ribald humor, the zingy ripostes that pepper the dialogue, and the detailed descriptions of one of England's loveliest cities will appeal to ardent Anglophiles and British cozy fans alike.' Booklist (USA) 'The kick-off to Goodhind's new mystery series - fast moving with a likeable heroine and an impeccably rendered Bath background...' Kirkus Reviews 'Quirky characters and intriguing goings-on in my favourite city…an absolute treat!' Jill Mansell Something in the Blood – Book One in the Honey Driver Mysteries Honey Driver runs a hotel in Bath. She also collects antique underwear. As her own boss, she's in charge one day and washing dishes the next, resisting her mother's match-making attempts and managing multiple responsibilities - mundane, safe, and unexciting. Then one day things change. Honey lands the job of liaising with the police on behalf of Bath Hotels Association. No worries, she tells herself. Nothing will happen; then an American tourist goes missing and Honey is called in to help. Despite the on/off hostility of her police opposite number, D C I Steve Doherty, she sticks to the task. In the process Honey finds out that there's more to work than washing dishes, and more to murder than malice aforethought. A Taste To Die For - Book Two in the Honey Driver Mysteries Chefs can be arrogant, competitive and downright murderous at times, so when Bath International Taste Extravaganza (BITE for short) organize a best chef competition, Honey Driver, the Hotels' Association police liaison officer, senses trouble. Her instinct proves correct when the winning chef is found dead in his own kitchen. Then a second, and a third...On top of this Honey's mother has fallen for the charms - and the white Rolls Royce - of a wealthy butcher, supplier to the catering trade. Is he really after her mother's body - well preserved as it is - or is he after the hotel's meat account? H oney's own relationship with dishy DCI Doherty is on hold. He's pooped - too tired even to fall for Honey's ample charms. As for the murderer, is this a case of past grievances? And once it's solved, will Honey finally get her man? Walking with Ghosts - Book Three in the Honey Driver Mysteries Hotel owner and police liaison officer Honey Driver is about to find out that the living are more terrifying than the dead. Bath's answer to Miss Marple; though younger and fuller of figure - accompanies professor of the paranormal, Mary Jane, on a ghost walk. The ghosts fail to appear, but one of the walkers is later found hanging from the rafters of an old shop.The supernatural has nothing to do with the murder, but it is connected to the past and the international demand for old artefacts. Honey has two other big problems; the first is that she's being stalked by a man in wellies riding a motorbike. The second is that her mother is threatening to move closer to her hotel. No guesses as to which concerns her the most. But does Honey have a ghost of a chance of solving her latest case...?