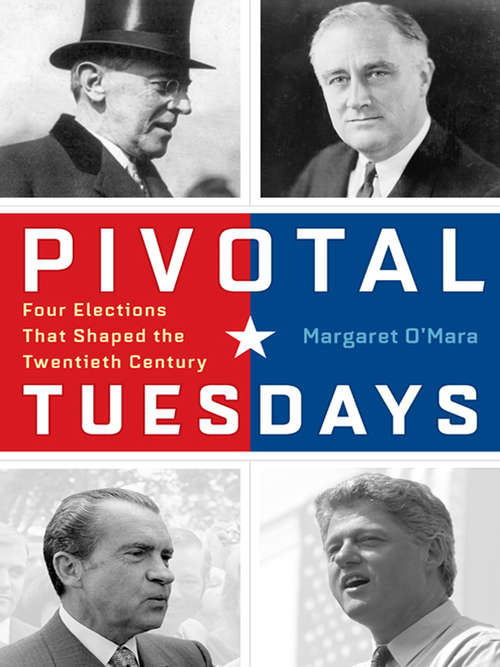 Serious and silly, unifying and polarizing, presidential elections have become events that Americans love and hate. Today's elections cost billions of dollars and consume the nation's attention for months, filling television airwaves and online media with endless advertising and political punditry, often heated, vitriolic, and petty. Yet presidential elections also provoke and inspire mass engagement of ordinary citizens in the political system. No matter how frustrated or disinterested voters might be about politics and government, every four years, on the first Tuesday in November, the attention of the nation--and the world--focuses on the candidates, the contest, and the issues. The partisan election process has been a way for a messy, jumbled, raucous nation to come together as a slightly-more-perfect union.Pivotal Tuesdays looks back at four pivotal presidential elections of the past 100 years to show how they shaped the twentieth century. During the rowdy, four-way race in 1912 between Teddy Roosevelt, William Howard Taft, Eugene Debs, and Woodrow Wilson, the candidates grappled with the tremendous changes of industrial capitalism and how best to respond to them. In 1932, Franklin Roosevelt's promises to give Americans a "New Deal" to combat the Great Depression helped him beat the beleaguered incumbent, Herbert Hoover. The dramatic and tragic campaign of 1968 that saw the election of Richard Nixon reflected an America divided by race, region, and war and set in motion political dynamics that persisted into the book's final story--the three-way race that led to Bill Clinton's 1992 victory.Exploring the personalities, critical moments, and surprises of these races, Margaret O'Mara shows how and why candidates won or lost and examines the effects these campaigns had on the presidencies that followed. But this isn't just a book about politics. It is about the evolution of a nation and the history made by ordinary people who cast their ballots.