Python in a Nutshell 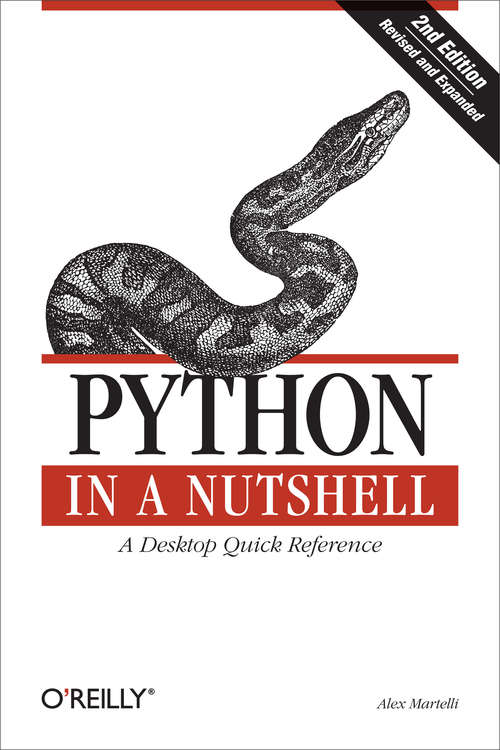 help remembering or deciphering the syntax of this open source language

and its many powerful but scantily documented modules. This

comprehensive reference guide makes it easy to look up the most

itself, but also the most frequently used parts of the standard library

and the most important third-party extensions.

Ask any Python aficionado and you'll hear that Python programmers have

it all: an elegant object-oriented language with readable and

maintainable syntax, that allows for easy integration with components

in C, C++, Java, or C#, and an enormous collection of precoded standard

library and third-party extension modules. Moreover, Python is easy to

learn, yet powerful enough to take on the most ambitious programming

challenges. But what Python programmers used to lack is a concise and

clear reference resource, with the appropriate measure of guidance in

how best to use Python's great power. Python in a

than the language itself; it also deals with the most

frequently used parts of the standard library, and the most popular and

presenting the highlights of the most important modules and functions

in its standard library, which cover over 90% of your practical

A fast-paced tutorial on the syntax of the Python language

An explanation of object-oriented programming in Python

A quick reference for Python's built-in types and functions

such as Numeric and Tkinter

Information about extending and embedding Python

Python in a Nutshell provides a solid,

no-nonsense quick reference to information that programmers rely on the

most. This book will immediately earn its place in any Python

Praise for the First Edition:

"In a nutshell, Python in a Nutshell serves one

primary goal: to act as an immediately accessible goal for the Python

language. True, you can get most of the same core information that is

presented within the covers of this volume online, but this will

invariably be broken into multiple files, and in all likelihood lacking

the examples or the exact syntax description necessary to truly

"O'Reilly has several good books, of which Python in a

Nutshell by Alex Martelli is probably the best for giving you

some idea of what Python is about and how to do useful things with it."