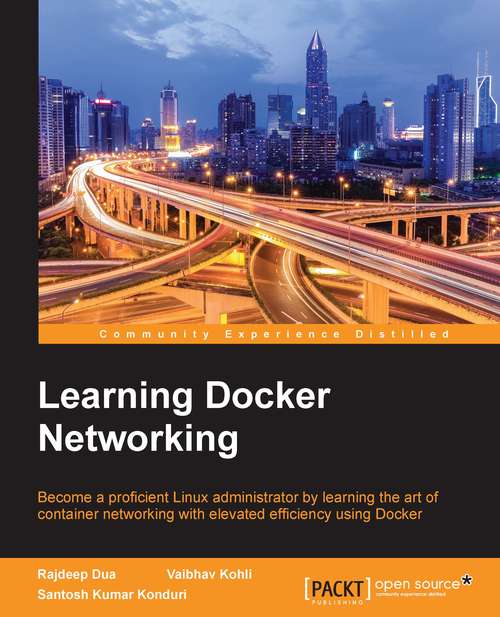 * Set up, configure, and monitor a virtual network of containers using a bridge network and virtual switches

* Master the skill of networking Docker Containers using frameworks such as Kubernetes, Docker Swarm, and Mesosphere

Who This Book Is For

If you are a Linux administrator who wants to learn networking using Docker to ensure the efficient administration of core elements and applications, then this book is for you. Basic knowledge of LXC/Docker is assumed.

What You Will Learn

* Observe the pitfalls of Docker networking and how to overcome them

* Learn how Docker networking works for Docker Swarm and Kubernetes

Docker is a Linux container implementation that enables the creation of light weight portable development and production environments. These environments can be updated incrementally. Docker achieves this by leveraging containment principles like cgroups and Linux namespaces along with Overlay filesystem based portable images. Docker provides the networking primitives that allow administrators to specify how different containers network with each application and connect each of its components, then distribute them across a large number of servers and ensure coordination between them irrespective of the host or VM they are running in.

This book will show you how to create, deploy, and manage a virtual network for connecting containers spanning single or multiple hosts.

This step-by-step guide covers the fundamentals relating to typical applications with a practical approach. There is a focus on providing the practical skills required to develop applications, with a summary of the key concepts where necessary.