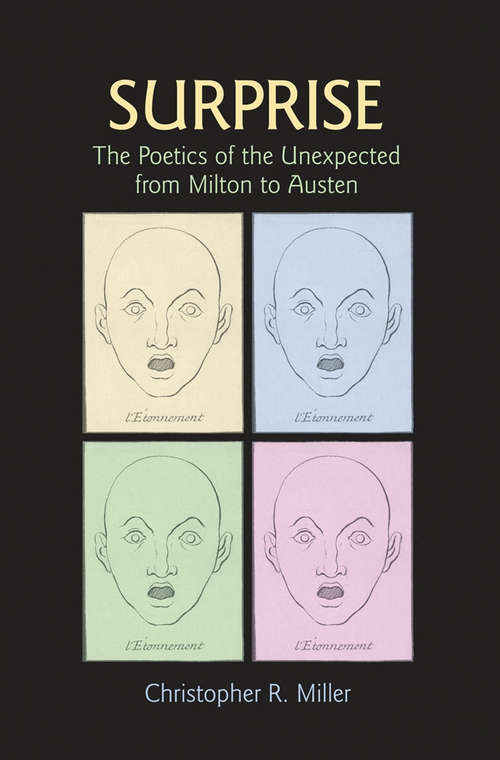 Today, in the era of the spoiler alert, “surprise” in fiction is primarily associated with an unexpected plot twist, but in earlier usage, the word had darker and more complex meanings. Originally denoting a military ambush or physical assault, surprise went through a major semantic shift in the eighteenth century: from violent attack to pleasurable experience, and from external event to internal feeling. In Surprise, Christopher R. Miller studies that change as it took shape in literature ranging from Paradise Lost through the novels of Jane Austen. Miller argues that writers of the period exploited and arbitrated the dual nature of surprise in its sinister and benign forms. Even as surprise came to be associated with pleasure, it continued to be perceived as a problem: a sign of ignorance or naïveté, an uncontrollable reflex, a paralysis of rationality, and an experience of mere novelty or diversion for its own sake. In close readings of exemplary scenes—particularly those involving astonished or petrified characters—Miller shows how novelists sought to harness the energies of surprise toward edifying or comic ends, while registering its underpinnings in violence and mortal danger. In the Roman poet Horace’s famous axiom, poetry should instruct and delight, but in the early eighteenth century, Joseph Addison signally amended that formula to suggest that the imaginative arts should surprise and delight. Investigating the significance of that substitution, Miller traces an intellectual history of surprise, involving Aristotelian poetics, Cartesian philosophy, Enlightenment concepts of the passions, eighteenth-century literary criticism and aesthetics, and modern emotion theory. Miller goes on to offer a fresh reading of what it means to be “surprised by sin” in Paradise Lost, showing how Milton’s epic both harks back to the symbolic functions of violence in allegory and looks ahead to the moral contours of the novel. Subsequent chapters study the Miltonic ramifications of surprise in the novels of Defoe, Haywood, Richardson, Fielding, and Sterne, as well as in the poems of Wordsworth and Keats. By focusing on surprise in its inflections as emotion, cognition, and event, Miller’s book illuminates connections between allegory and formal realism, between aesthetic discourse and prose fiction, and between novel and lyric; and it offers new ways of thinking about the aesthetic and ethical dimensions of the novel as the genre emerged in the eighteenth century.