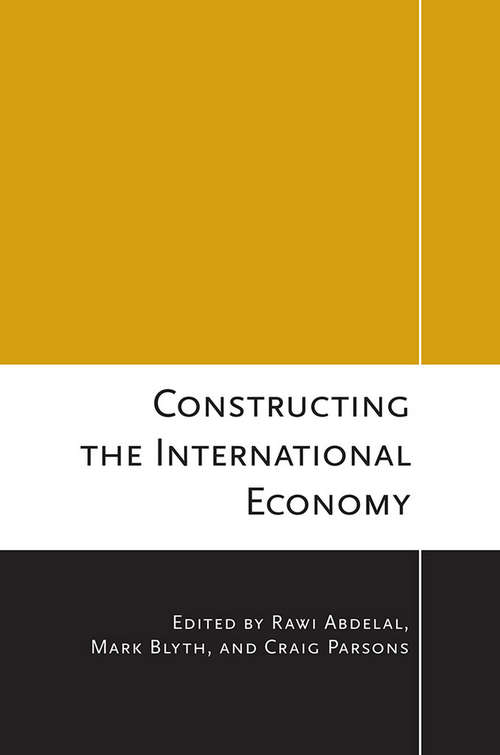 Focusing empirically on how political and economic forces are always mediated and interpreted by agents, both in individual countries and in the international sphere, Constructing the International Economy sets out what such constructions and what various forms of constructivism mean, both as ways of understanding the world and as sets of varying methods for achieving that understanding. It rejects the assumption that material interests either linearly or simply determine economic outcomes and demands that analysts consider, as a plausible hypothesis, that economies might vary substantially for nonmaterial reasons that affect both institutions and agents' interests. Constructing the International Economy portrays the diversity of models and approaches that exist among constructivists writing on the international political economy. The authors outline and relate several different arguments for why scholars might attend to social construction, inviting the widest possible array of scholars to engage with such approaches. They examine points of terminological or theoretical confusion that create unnecessary barriers to engagement between constructivists and nonconstructivist work and among different types of constructivism. This book provides a tool kit that both constructivists and their critics can use to debate how much and when social construction matters in this deeply important realm. Contributors: Rawi Abdelal, Harvard Business School; Jacqueline Best, University of Ottawa; Mark Blyth, Brown University; Mlada Bukovansky, Smith College; Jeffrey M. Chwieroth, London School of Economics; Francesco Duina, Bates College; Charlotte Epstein, University of Sydney; Yoshiko M. Herrera, University of Wisconsin-Madison; Paul Langley, Northumbria University; Craig Parsons, University of Oregon; Catherine Weaver, University of Texas at Austin; Wesley W. Widmaier, Saint Joseph's University; Cornelia Woll, CERI-Sciences Po Paris